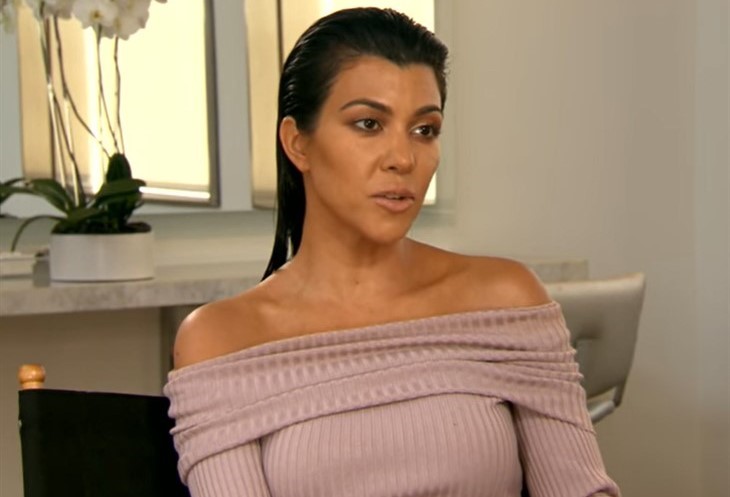 Kourtney Kardashian became famous as the oldest sister on “Keeping Up With The Kardashians” (KUWTK). In that role, Kourtney became a star for several reasons. First, the cameras showed her becoming the first to give her mom Kris Jenner a grandchild. And second, the now-42-year-old went through a dramatic on-again, off-again romance with baby daddy Scott Disick, now 38.

Recently, Kourtney changed her life once more, becoming engaged to Travis Barker. And now, just ahead of the upcoming KUWTK spin-off, Hulu’s “The Kardashians,” Kourtney gave a rare interview. But did Kardashian go too far in spilling Too Much Information (TMI)? Find out below!

As fans of the Kardashian clan await their new reality TV show, Kourtney Kardashian decided to spill about her past, present, and future, per E News. And she gave some intriguing insights about the 20 seasons she devoted to KUWTK. For instance, Kourtney feels that she suffered in the spotlight. As a result, she believes that the cameras treated her unfairly.

“I felt like I was being almost a character,” Kardashian recalled about starring on KUWTK. “This is Kourtney, and she’s in a bad mood, so even though she was laughing really at lunch, we’re going to cut out the laughing and let’s only use the annoying comment that she said.” But although she felt unhappy, Kardashian also felt that she owed it to her sisters and mom to continue their reality TV show to the end.

In the future, though, Kourtney will return to reality TV to star in the family’s new Hulu show, “The Kardashians.” But with her engagement to Travis Barker turning into her story line, the mom of three seems more relaxed about those episodes. And she even spilled on life with Travis. For example, Kardashian admitted she conducted the entire interview wearing her fiance’s underwear. “They’re Balenciaga,” she added.

And Kourtney also shared that she issued a challenge to Barker. “You need to dress me.” As a result, Kardashian wore her fiance’s sweats and T-shirt. And the shirt’s slogan showed the couple’s sense of humor: “My mom’s going to kill me when she sees this tattoo.”

But the KUWTK star also turned serious in discussing her romances prior to Travis Barker. And Kourtney Kardashian seemed to throw some shade at her former boyfriend/baby daddy Scott Disick. “I just used to be really indecisive,” Kourtney confessed. “I think it was in a time when I maybe felt more insecure or not in the greatest relationships.”

In addition, Kardashian shared her excitement about her future both professionally and personally. In terms of work, Kourtney claims that “there is no place” she would prefer to working with her family. And she’s excited about support from her fiance Travis as well. As for the family’s upcoming Hulu show, Kourtney sees it as a reality TV reboot.

Scott unfollows ALL Kardashians after being snubbed from reality show https://t.co/00704DzBdW

But one person doesn’t feel so excited about Kourtney’s future, according to the Sun. Her former boyfriend/baby daddy Scott Disick reportedly feels that he got snubbed by the family’s new reality TV show. As a result, he allegedly stopped following all of the Kardashian sisters!

Scott, 38, deleted Kourtney, Kim, and Khloe Kardashian as well as Kendall, Kylie and Kris Jenner from his Instagram. And some fans wonder what that clue to a feud will mean for the former couple’s three children: Mason, 12, Penelope, nine, and Reign, seven. But it also could mean that Disick’s previously friendly relationship with Khloe could face trouble. Scott has even recently flirted with her on Instagram.

Tell us what you think about Kourtney Kardashian’s interview. Do you think that Scott Disick has cut ties with the entire KUWTK clan? And after you’ve shared your views, check back on our site for more reality TV and celebrity news!

Y&R Spoilers: Courtney Hope Opens Up About Her Personal Struggles