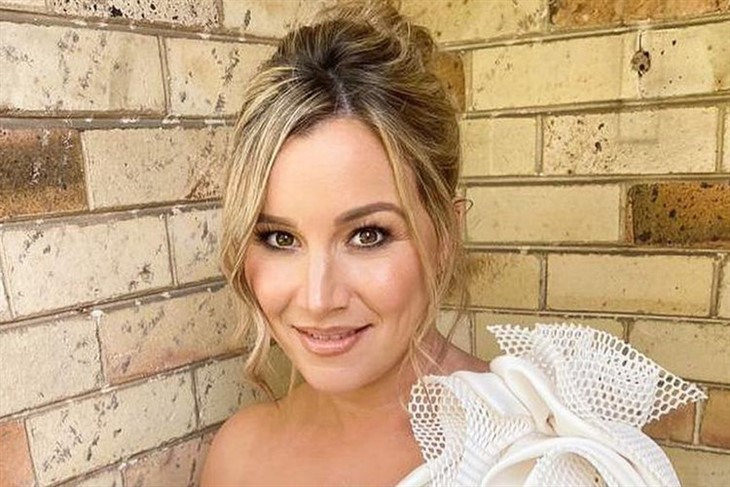 Oh yeah, you heard right, Hannah said “I do” to her boyfriend of nearly four years Josh Roberts on Saturday, March 26, in what you’re free to call a boat-iful wedding.

The ceremony took place in Australia, on Sydney’s Northern Beaches, with Hannah dressed in a Velani bridal gown and Josh who, in honor of his Scottish roots wore a kilt. Their one year and four-month-old daughter Ava Grace Roberts wasn’t left out either, she was one of the two flower girls of the occasion.

An “amazing” local celebrant who goes by the name Caroline officiated the ceremony. Hannah admitted that Caroline was fantastic, warm, kind, and above all understood their sense of humor. According to Hannah, Caroline’s speech before she joined her and Josh together contained the words tequila and margarita twice.
The “Love Story” of Hannah And Josh

Caroline entertained the guests by telling them Hannah and Josh’s love story. It actually began in a Sydney bar after Hannah had wrapped up filming the forth season of Below Deck Mediterranean.

Hannah recounted having a glass of wine with Josh the first day, going for dinner the next night, went to race and caught up for a drink the following night and on, and on, they kept seeing each other for seven days.

The day they both decided to spend the night separately, they ended up seeing the same TV Show and texting each other about it, all night. Hannah stated that at first, Josh had no idea she was a TV Star herself, and that the day she revealed it to him, he said it wasn’t a big deal.

Hannah was released from Below Deck Mediterranean at the fifth season. After her release, she set out to become a mother and that was after their two-year anniversary, as they welcomed their first child Ava in 2020.
The Planning Of The Wedding

Planning the wedding wasn’t easy for Hannah as she was parenting her daughter who’s almost two years as well as running the Ocean International Training Academy! She described her situation then as “hectic” stating that they basically had a disaster wedding planner who took on their wedding and did absolutely nothing for six weeks. So, this whole wedding was actually planned in the last four weeks.

Hannah said that Josh wanted to “scale it all back,” but she didn’t want to give up on her dream wedding. With luck, she found a new planner and together, their “sheer determination” started making things happen.

The reception took place in the home of Hannah and Josh, and most of her Below Deck Mediterranean co-stars graced the occasion including Anastasia Surmava, who is recently engaged.

After the vows have been exchanged, the new couple will be heading to Thailand to “relax” for their honeymoon.

Hannah said “Everyone’s like, ‘Oh, the nightclubs are open!, and I’m like, ‘Are you f–king kidding me? We have a baby. We don’t want to go to nightclubs. We want to take a nap.'”

Y&R Spoilers: Will Ashland Meet His End At Victoria’s Hand, In Self-Defense?