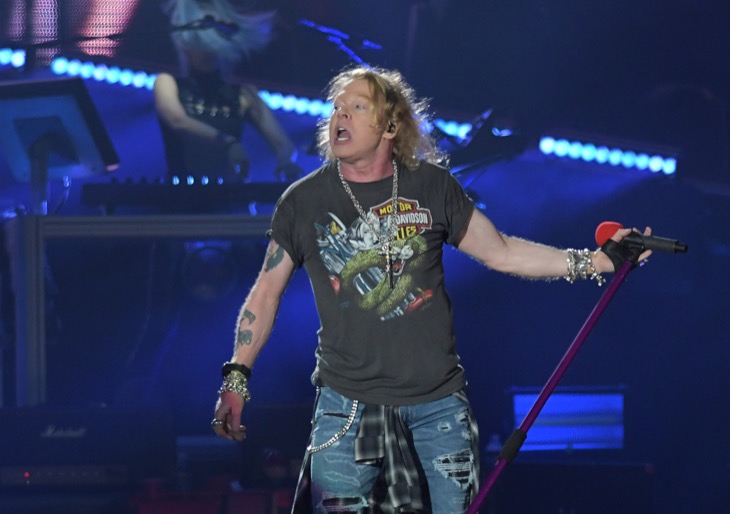 Axl Rose had been the lead singer of the rock band Guns N’ Roses since the mid-80s, and for the second time, an accident happened during one of their concerts. Actually, the band has been touring in Australia, and will soon move on and play in New Zealand. After that, they’ll take a break for a while and that will give music fans a lot of time to diss Axl Rose.

Music lovers across the world enjoy getting out for a concert. After all, there;’s nothing like a live event to get the adrenalin going. Of course, these days, there is also the opportunity to get out their phones and capture some footage to share on social media. However, there can be tragic events and even minor injuries at any big-name concert. Playing at the Adelaide Oval, one woman ended up quite badly hurt and Axl spoke about it later.

Guns N’ Roses fans in the USA  fell in love with the band back in the late 80s when their single, “Welcome to the Jungle” was released. Those who went to live concerts or watched on YouTube, know that Axl started a tradition of tossing his mic into the audience at the end of the show. And, that act has previously injured a person. Nearly a decade ago, a fan in Perth sued the band because the mic broke some teeth.

When Page Six reported about Axl Rose canceling the mic-throwing, they shared the story on Instagram. Actually, some people were amazed at how badly the woman, Rebecca Howe, was injured. With two black eyes, apparently, the mic also broke her nose. However, in the comments section,  unsympathetic folks slammed her for apparently not paying attention.

Guns N’ Roses fans love trying to catch the mic. After all, it’s a collectible item and is highly coveted. So, everyone waits for the moment. Obviously, Axl Rose didn’t intend to hurt Rebecca Howe, but he will stop throwing the mic in the future. He said in a statement, “Obviously we don’t want anyone getting hurt or to somehow in any way hurt anyone at any of (our) shows anymore.”

Irritated Guns N’ Roses fans took to the comments and one of them wrote, “She could’ve caught it and had a great souvenir if she’d been paying attention.”

Another unsympathetic reader said, “Thanks for ruining it for everyone else. 🖕🏼”

Axl also got dissed and one follower penned, “Omg so now ACCIDENTS are canceled too 🤦🏼‍♀️.”

Fans are disappointed, so they also turned on Axl personally. One of them opined, “He looks like a female check out lady at Walmart.”

Clearly, it’s going to be a long-running thread on social media. No doubt, lots of memes will arrive in the near future.

Be sure to catch up on everything happening with Guns N’ Roses right now. Come back here often for all Axel Rose spoilers, news, and updates.

Days Of Our Lives Spoilers: Will Kristen Have Rolf Brainwash Brady’s Love For Her Back?