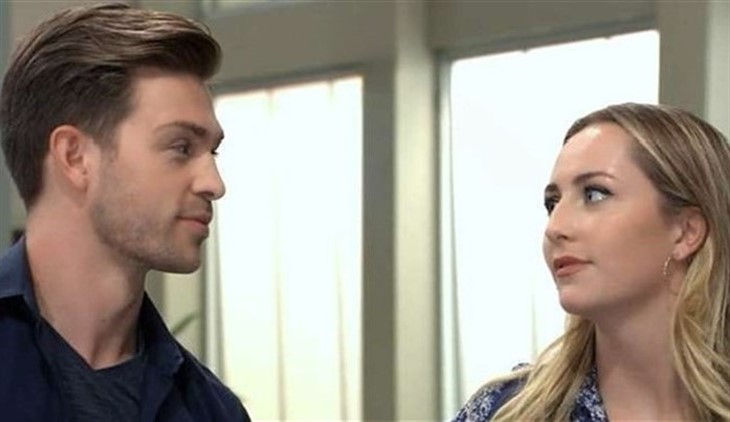 General Hospital (GH) spoilers and updates tease that Josslyn Jacks (Eden McCoy) and Dex Heller (Evan Hofer) will be busted! They’ll be making out in his apartment when unexpected company arrives, and they’ll scramble to cover.

Dex tried to obey Michael Corinthos (Chad Duell) when he told him to keep Josslyn at arm’s length, but Joss is very persistent-and very attracted to Dex. She had gone out for a run after having a talk about switching her college major to medicine with her mother, Carly Spencer (Laura Wright). She wouldn’t admit to her mom that it had anything to do with Dex, other than inspiration from helping him with the gunshot wound, but showed up at his apartment.

She came and checked out his gunshot wound and wanted to make sure he was okay and offered to get more bandages and antibiotic ointment. He had told her he could order that kind of thing online and just to bail out on him because of the dangerous life he leads.

Joss had refused to leave him alone and scoffed at his “life of danger” noting he works for Sonny Corinthos (Maurice Benard) – as far as she knows. He walks away from her and tells her he’s trying to do the right thing here, and she tells him to try being honest then. He exclaims, “You want honesty?” and pulls her into a passionate kiss. They start making out after the subject matter had been him in her bed in her dorm room and her not being in it. Then, they hear a knock at the door and the pair and they panic as they hear Sonny’s voice telling Dex he knows he’s in there and to open up.

Joss, in a whisper, asks what’s Sonny doing there, and Dex, in a whisper, says to pretend nobody’s home and they look around for a place for Joss to hide. Sonny’s knocks and requests are becoming more persistent, as he keeps saying to open up the door, and repeats that he knows Dex is in there. Joss and Dex both look more and more panicked as the knocking and demands to open up keep coming.

Josslyn finally gasps, likely expecting Sonny to kick the door down and asks Dex what’s plan B? Again, they look around the room as if to look for a place for Joss to hide herself and her things, because Sonny’s not going away.