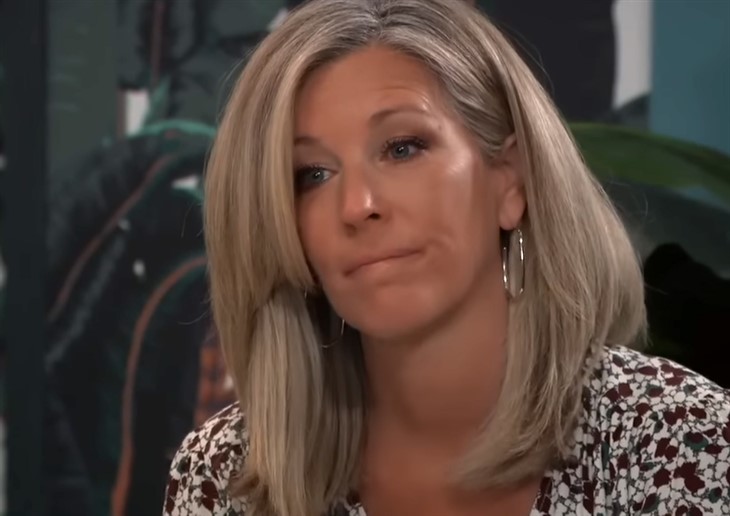 General Hospital (GH) spoilers reveal Carly continuing to be in every storyline even if she doesn’t belong there — and nowhere did she belong least than at the Quartermaine house on Thanksgiving.

Let us never forget that at one time Carly Spencer (Laura Wright) lied to AJ Quartermaine about NOT being her baby’s father, condoned hanging him from a meathook to get him to sign his parental rights away, and years later condoned Sonny Corinthos (Maurice Benard) killing AJ in cold blood.

This was Monica Quartermaine’s (Leslie Charleson) beloved boy so watching Carly slowly ingratiate herself into the Q lives and spending time in that Quartermaine mansion — aka, Monica’s house — has been infuriating, to say the least.

It was weird enough when Monica and Carly co-hosted Nelle Benson’s (Chloe Lanier) baby shower in the living room. Then, we had to watch Monica embrace the idea of Jason Morgan (Steve Burton) and Carly finally marrying, but to have her there for Thanksgiving is just too much.

Doesn’t Carly have a real family of her own and isn’t she supposed to be staying away from Drew Cain (Cameron Mathison) thanks to the insider trading threat from Ned Quartermaine (Wally Kurth(? Yes, yes indeed. So, why would she be Drew’s date for Thanksgiving at his family’s house? Oh, because Wiley, who was invisible for the entire episode wanted her there. Got it. Still makes no sense.

But again, this is Carly. Everyone’s business is her business and since there doesn’t seem to be a compelling story to tell about her when she is not with Sonny, she needs to be at the Q Thanksgiving because if we don’t see Carly 3-5 times a week for no particular reason, this wouldn’t even be GH anymore.

Carly has to interfere in everyone’s business even if they have nothing to do with her, which is how she ended up on that bridge when Drew was in a real storyline trying to bring down Victor Cassadine (Charles Shaughnessy). Without Sonny, every time we turn around, Carly is inserted somewhere just to have a few lines and let everyone know how angry she is. Well, we hope she likes pizza on Thanksgiving because that’s what she gets being a Q guest.

Stay tuned to General Hospital weekdays to see where Carly pops up next.