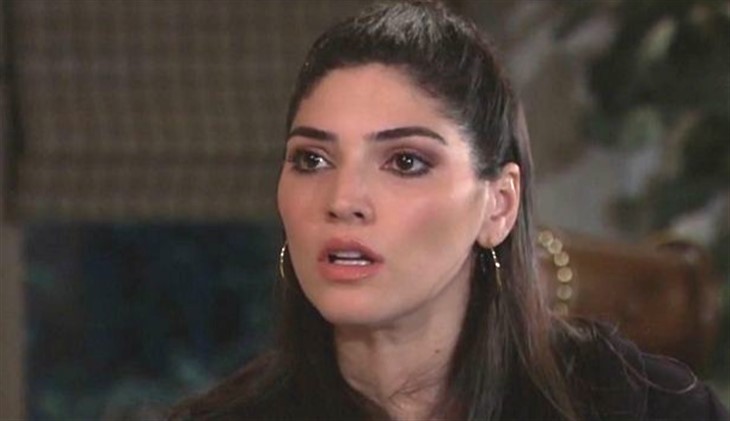 Harrison Chase (Josh Swickard) broke up with Brook Lynn for keeping the letter from the civilian complaint review board she was supposed to write a secret. Now she’s trying to fix it after the fact, but Dante Falconeri (Dominic Zamprogna) says unfortunately, it’s too late, and Chase missed his chance to be a cop again. That’s because Brook Lynn missed a chance to get his badge back and she took away his choice, and it was taking away his choice that he’s really upset about.

There may not be a chance to fix either Chase’s police career or their relationship because Brook Lynn thought she had the right to think for him and she doesn’t. But it’s not for lack of trying, and no one will be surprised if she writes the letter even if Dante thinks it is too late.

Good friend Sasha Gilmore (Sofia Mattsson) and Chase catch up, and it’s obvious he’s talking about his break up with Brook Lynn and the reasons for it. Sasha tries to help him see Brook Lynn’s side, and says in her heart, she was doing it for the both of them. Maybe she meant well, but as Chase explained, he made a decision for Willow Tait (Katelyn MacMullen) for her and it backfired as well. That was back when Michael Corinthos (Chad Duell) was with Sasha and Chase was with Willow, and they pretended to have an affair to push Michael and Willow together. That was over who would be best to take care of Wiley Corinthos (Viron Weaver) in the court’s eyes, and they were up against Nelle Benson (Chloe Lanier).

Meantime, Nina Reeves (Cynthia Watros) is with Willow, and she’s telling her she’s hoping she would help out a friend. As expected, Nina and Willow will wind up clashing, and Willow certainly wouldn’t consider Nina a friend! Perhaps Nina is talking about someone else when she says “friend” but they’ll never see eye to eye anyway.

Little does Nina know that Willow needs her help as she’s her birth mother as well as Nelle’s. How long that will stay a secret is anyone’s guess, because Carly Spencer (Laura Wright) is “helping” Drew Cain (Cameron Mathison) on something she already knows and lied about.

Elsewhere, Josslyn Jacks (Eden McCoy) opens up to Carly when she asks her if Dex Heller (Evan Hofer) is a factor in her decision. Exactly what that decision is could be something to do with her relationship with Cameron Webber (William Lipton) falling apart. It’s been under stress for sure, but Josslyn’s attraction away from Cam and towards Dex certainly isn’t helping matters any. It seems like she is outgrowing her high school sweetheart and he’s not keeping up.

Elsewhere, Dex updates Michael on what happened when he was missing and tells him he’s not going to like what happened next. He is likely talking about the fact that Josslyn nursed him back to health and kept him in her dorm room. Michael had given Dex strict orders to stay away from Joss, and yet after he was wounded in the prison transport fiasco he went to the gatehouse for help.

Michael might give him a pass on that, considering he would have had no idea Joss was babysitting Wiley that night. But being nursed back to health in her dorm room is a whole different situation!

There is more help needed as Sonny is in his office at Pozzulo’s and telling someone if something sounds too good to be true, it usually is. Valentin Cassadine (James Patrick Stuart) and Sonny are working together to keep Anna Devane (Finola Hughes) safe as they all work to exonerate her from Lucy Coe’s (Lynn Herring) supposed murder. If they are communicating with Robert Scorpio (Tristan Rogers) and Laura Collins (Genie Francis) then they know Holly Scorpio (Emma Samms) impersonated Anna. Valentin goes to Sonny to ask for more assistance, as they continue to look for a living Lucy, Valentin and Martin Grey (Michael E. Knight) having teamed up.