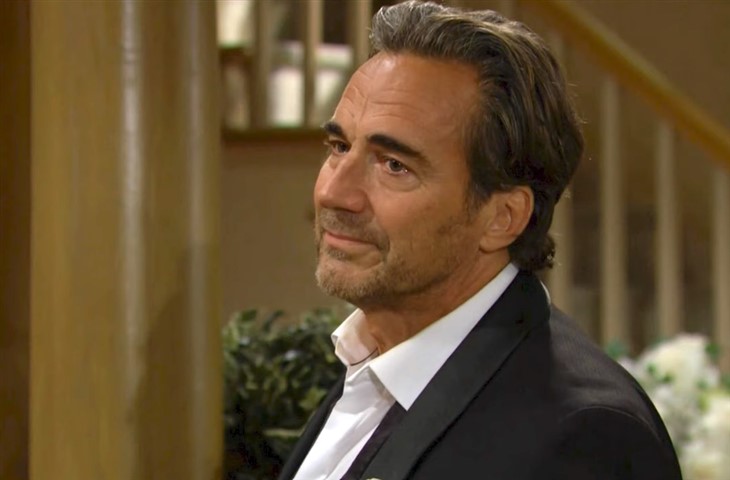 The Bold and the Beautiful (B&B) spoilers document that Ridge Forrester (Thorsten Kaye) finally knows why his life was disrupted. An apology of the highest order must be offered to Brooke Logan (Katherine Kelly Lang), and Thomas Forrester (Matthew Atkinson) needs to face consequences for his outrageous actions.

Taylor Hayes (Krista Allen) might be able to talk her way around proceeding with the wedding ceremony even though she learned about Thomas’ actions minutes before the latest Forrester mansion living room nuptials. Ridge will need to prioritize the order of events as episodes unfold, with Thomas being the natural first target.

Steffy Forrester Finnegan (Jacqueline MacInnes Wood) had to speak her peace and was not going to hold it forever, as the wedding routine ask goes. Carter Walton’s (Lawrence Saint-Victor) request was followed by Steffy’s stunner.

She was not objecting to her father and mother remarrying, offering that was not her intention. Steffy was forced to speak out because Thomas refused to do so, and Taylor appeared unable to act on the ton of soapy bricks her son dropped just moments before the long-awaited and desired remarriage to Ridge.

Steffy’s words were well-intentioned and included the hope that doing so would not spoil Ridge’s intent to remarry.

Could Taylor have spoken up, thereby preventing Steffy from having to do it? Sure. But Steffy shouldering the responsibility made more sense because she was not the bridge.

Taylor was thrown into a maelstrom the instant she was provided with evidence that Thomas, not Brooke, reported him to Child Services. Allen’s character had her wedding dress on and was preparing to walk down the staircase when she heard her children arguing.

The loudness of Steffy and Thomas’ disagreement was surprising considering the nature of the day. Hopefully, Ridge balances the emotions he feels with a recognition of what Taylor endured.

Ridge felt compelled to leave Brooke after hearing her voice on a digital recording. But Thomas has been revealed as digitally orchestrating that screeching plot point.

Brooke was lamenting her plight at the Logan mansion. The presence of her sisters and father helped a bit. But Ridge was still believed to be remarrying Taylor, and all appeared lost.

Destiny can be messy. So, Brooke will need to practice extreme forgiveness if she and Ridge are to reconcile. That assumes the remarriage to Taylor is off and will not be revisited on B&B.