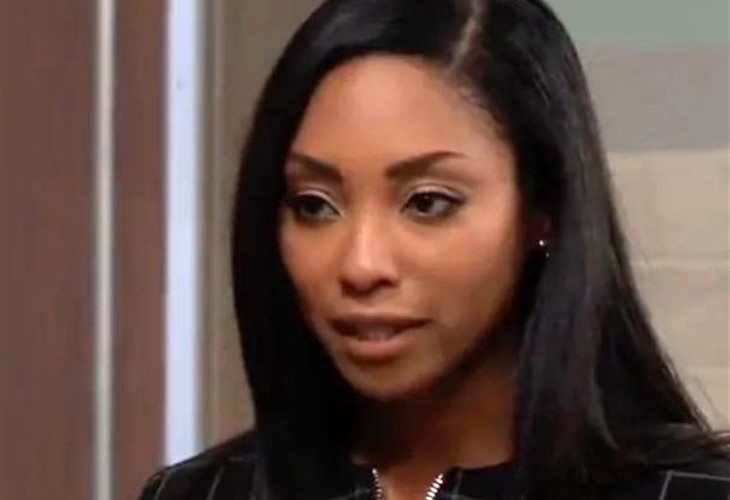 General Hospital spoilers for Wednesday, May 18 tease there will be threats, promises and pleas for help on the next GH!

Port Charles Police Commissioner Jordan Ashford (Tanisha Harper) freaks out as she doesn’t know where her son TJ Ashford (Tajh Bellow) is and asks if anyone has spoken to him. Previous GH episodes revealed that he spoke to his mother about Marshall Ashford (Robert Gossett) and even asked her help to track down the missing grandpa! She told him to look for clues in his clarinet case and he found a receipt from a shop in Brooklyn, New York.

Obviously she is forgetting her conversation with her son if she’s that worried about him! TJ found the receipt in front of her and mentioned going to look for Marshall!

GH Spoilers – Will You Please Help Us

Meanwhile, TJ and Molly Lansing-Davis (Haley Pullos) are in Brooklyn, New York likely at the shop shown on the receipt he found in the clarinet. TJ pleads with the shop owner, asking if he or she will please help them, probably asking if the shop owner has an address or a phone number for Marshall. Obviously they will mention that he is a missing senior citizen with some health issues although likely they won’t specify what they are. TJ and Molly won’t want to violate Marshall’s rights for his private health information to be protected, otherwise known as HIPAA. TJ is very worried about his grandfather, knowing he has a mental disorder of some kind from what Curtis Ashford (Donnell Turner) told him previously.

Curtis talks to Portia Robinson (Brook Kerr) about what he found out about Marshall from his aunt Stella Henry (Vernee Watson) previously. Curtis was upset to learn Stella knew the truth about what happened to his father all along and didn’t tell him, and even more upset to hear his  mother knew! Curtis tells her that Marshall’s not the only one that was lying to him!

Portia will also open up to Curtis about her fears concerning her daughter Trina Robinson’s (Tabyana Ali) situation. They’re going to need a real miracle for her to be exonerated!

GH Spoilers – I’m Not Going To Let You Blow It

Elsewhere, Brook Lynn Quartermaine (Amanda Setton) is talking to Harrison Chase (Josh Swickard;. she tells him there’s no way in hell she’s going to let him blow it on her account! It sounds like she might be talking about him singing her song with her father at Leo Quartermaine’s (Easton Rocket Sweda) birthday party earlier. In a close moment, they will get an unwelcome visit from her shady former producer Linc Brown (Dan Buran) who has come back to haunt her! Supposedly, she is free and clear of her contracts with him but maybe not so much – her song being performed publicly may have been a problem!

Brando Corbin (Johnny Wactor) and Sonny Corinthos (Maurice Benard) reconnect at Brando’s garage and talk about the challenges of family. The subject of Sonny’s issues with his, in particular Michael Corinthos’ (Chad Duell) anger will likely be one of the challenges in discussion! Brando’s new marriage to Sasha Gilmore Corbin (Sofia Mattsson) may be another issue that they might talk about.

Brando tells Sonny to get his hands dirty, perhaps he is suggesting a little good hard manual labor might go towards easing the stress!  As if punching a boxing trainer bag at Volonino’s Gym isn’t enough!

Meanwhile, Gladys Corbin (Bonnie Burroughs) is with Sasha, and she’s figured out what’s going on and why she’s looking so pale! Previously, she’d run off that stalkerazzi as Sasha called him Felty (Brian Norris)! Gladys knows that Sasha is back on pills to cope and she’s covering for her but she’s worried! She tells Sasha to drop the act, and lets her know that she knows the truth! Gladys is understandably worried – Sasha nearly died from some bad pills that Cyrus Renault (Jeff Kober) had given her, that’s how she and Brando started getting to know each other!

General Hospital Spoilers – He’s Trying To Take Me Down!

It looks like Sonny and Brando are continuing their discussion about family challenges as Sonny says “he’s trying to take me down”! That is likely referring to Michael, because Michael is very angry at Sonny for leaving his mother Carly Corinthos (Laura Wright) for Nina Reeves (Cynthia Watros)! Previous GH episodes revealed Michael talking about taking Sonny down and making sure he didn’t hurt the family any more than he has.

That’s even more important to Michael as Nina’s visitation hearing approaches! He wants to drain the Corinthos swamp and make Corinthos a name to be proud of and that means getting rid of Sonny!

Y&R Spoilers: A Surprise Guest At The Teriah Wedding