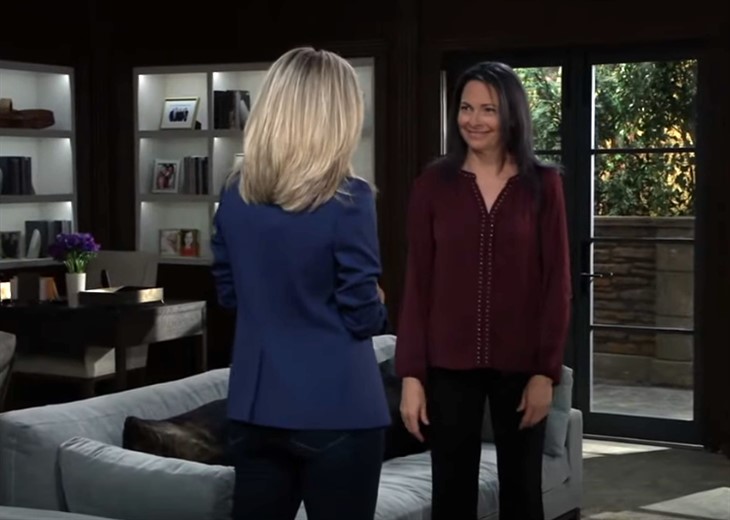 General Hospital (GH) spoilers tease that Carly Corinthos (Laura Wright) will once again have to face off with Gladys Corbin (Bonnie Burroughs) over something in an upcoming episode of General Hospital!

General Hospital Spoilers – What Does Gladys Corbin Have A Burr Up Her Behind About NOW?!

General Hospital viewers know Gladys always had a problem with something or someone, and she’s always looking for a money grab! General Hospital viewers will recall that Carly bent over backwards to help get Gladys out of trouble with Cyrus Renault (Jeff Kober) so she could help set Jason Morgan (Steve Burton) free. Carly was able to arrange for Gladys and Brando Corbin (Johnny Wactor) to have no liability with immigrations and customs enforcement for helping keep Dev Cerci (Ashton Arbab) safe, and what she couldn’t get done others did. Carly could have been in trouble herself, but Cyrus’ threats melted away like a snowball in the Sahara once he was carted off to the Feds!

Cyrus was way more important to the Feds than prosecuting the case of an illegal immigrant who is no longer living! After Cyrus was taken and Jason was freed, General Hospital viewers will recall Brando wanting to know where he stood with the Corinthos organization – Carly had told him he is still a part of the Corinthos family, and Jason assured him the garage was his to keep.

Then Gladys made her plan to live with Brando and Sasha Gilmore (Sofia Mattsson) on General Hospital, who are making her a grandma. That wasn’t too tasty of a bite for Brando and Sasha, but she has to live somewhere. Then she makes demands of Jason and Carly again, and Carly wonders what could she possibly have a burr up her behind about now?!

GH Spoilers – Perhaps Gladys Corbin Wants A More Important Role In The Corinthos Family Herself, And For Brando Corbin

General Hospital viewers have to admit, Gladys certainly seems to be drawn to danger! General Hospital viewers will recall that she was trying to be Cyrus’ girlfriend, and now that the Novak crime family is making problems for Carly and Jason and the Corinthos organization, maybe Gladys wants to be a more important part in the organization herself. She may want Brando to have a more important role now too, since Carly and Jason have married and are taking Sonny Corinthos’ (Maurice Benard) place together. But more than anything, Gladys is drawn to men with money – dangerous or not!

General Hospital recaps and spoilers indicate she showed up in Port Charles the same time Cyrus started making moves for Sonny’s territory and Brando came because of seeing he had a son he didn’t know about! There is a good possibility that living with Brando and Sasha will not be as lush a lifestyle as she has become accustomed to, and she’ll want to move into a Metro Court Suite again or possibly even into the Corinthos compound!

General Hospital spoilers hint Carly will not put up with Gladys’ moneygrubbing crap, and she’ll confront her. Carly may notice that Gladys is not treating Sasha very well and she likes Sasha – after all, Sasha could have been her daughter in law if things had worked out differently and that could have been her grandchild Sasha is carrying. Carly will definitely take up for Sasha and get in Gladys’ face about something like that! Let’s just hope that Gladys didn’t date Vincent Novak (Glenn Taranto) back in the day and he’s not Brando’s birth father!