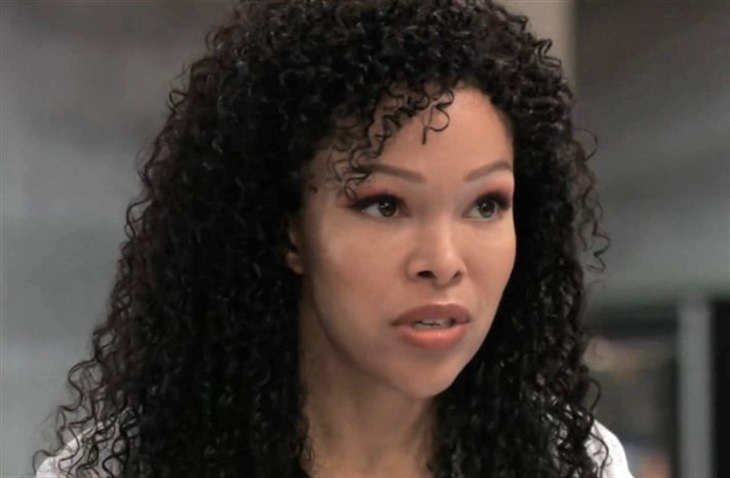 General Hospital (GH) spoilers tease that Portia Robinson (Brook Kerr) will face her ex-husband Marcus Taggert (Réal Andrews) and there may be a bit of a confrontation between them in an upcoming episode of General Hospital!

General Hospital viewers will recall that Portia and Marcus have much to discuss now that he has been released from jail and is officially back from the dead! They share a past together and then there’s Trina Robinson (Sydney Mikayla) who Portia has always maintained is Marcus’ daughter in spite of she cheated on him with Curtis Ashford (Donnell Turner) during the time that Trina would have been conceived.

Most of the vitriol between him and Trina on General Hospital was talked out and she is no longer angry with her father, but Portia discussed many things she was upset about that were reasons for her divorce with Curtis in a recent episode.

It may be these things that she faces her ex-husband about, in addition to him staying with his former Drug Enforcement Administration (DEA) partner Port Charles Police Commissioner Jordan Ashford (Briana Nicole Henry)!

Curtis was blindsided when he had stopped by to talk to Jordan, and saw Marcus Taggert there and more than likely told Portia that Marcus was staying with Jordan! While Curtis and Jordan talk about the future of their relationship, Portia will face Marcus about the past of theirs and what might possibly be ahead – after all, they are still co-parents to Trina until she leaves the nest and flies away. Whether Trina is really his or she could be Curtis’ is irrelevant – Marcus Taggert is the only father Trina ever knew.

GH Spoilers – Could Someone Have Told Marcus Taggert About Portia Robinson’s Affair?

Marcus was behind bars for several months, and he and Jordan have had plenty of opportunities to talk, with the jail being in part of the Port Charles Police Department. They have even more opportunities now that he is staying with Jordan. Her being responsible for him was part of the reason he was let out of jail. Portia had talked to Jordan several months ago when the question of Trina’s paternity came up and she had assured Jordan and Curtis that Trina was Taggert’s and not Curtis’. But sometimes when people keep a lot of secrets among a group of people, they don’t remember who knows about what and it’s possible that Jordan could have let something slip to Taggert that she mistakenly thought he already knew!

It may be Taggert calls Portia to meet with him about that very thing, even though if Jordan let it slip about Portia’s affair with Curtis she may have also mentioned Trina being his daughter. But then again, if she didn’t realize he didn’t already know, maybe she didn’t! It’s understandable that he might want to hear what happened and why it happened from Portia herself and he might be rather upset!

The whole reason Curtis separated from Jordan on General Hospital was all her secrets that she didn’t let him in on, and the reason Portia divorced Taggert was that he was always gone! That’s why she had the affair even though Curtis cut her off cold as soon as he found out she was married! If Taggert has just found out about the affair and doesn’t know for sure that Trina is his, fans can expect quite a dramatic scene!