Y&R Spoilers: A Surprise Guest At The Teriah Wedding 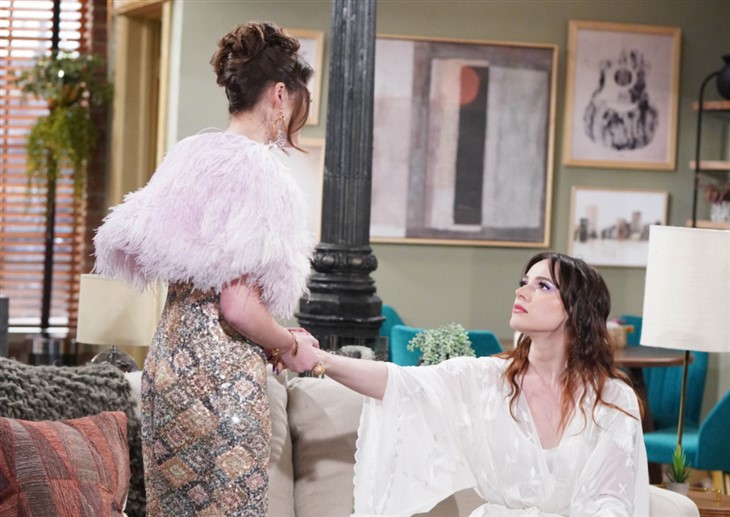 The Young and the Restless (Y&R) spoilers for Wednesday, May 18, 2022, reveal a romantic and festive reception for Mariah and Tessa, but all is not as it seems as an unexpected guest is about to make things extremely complicated for the newly-married pair.

The Young And The Restless Spoilers – Celebration Time

Noah Newman (Rory Gibson) put together an absolutely fabulous wedding with a 1970s theme that can’t be beat. Between the pink, the flowers, and the neon signs, it’s everything Mariah Copeland (Camryn Grimes) and Tessa Porter (Cait Fairbanks) could have hoped for. Kyle Abbott (Michael Mealor) was there to officiate with Kevin Fisher (Greg Rikaart) and the best man and Crystal Porter (Morgan Obenreder) as a bridesmaid. Mariah and Tessa exchanged beautiful vows, but now it’s time to celebrate.

The reception gets off to a rip-roaring start with Jack Abbott (Peter Bergman) even catching the bouquet as all genders were able to line up for that tradition. His granddaughter Allie (Kelsey Wang) gets to know people better and Noah has definitely taken a liking to her. Perhaps he is no longer in love with his new sister-in-law and accepted things as they are.

Of course, someone very unexpected shows up to pay a visit for the brides. We did see Diane Jenkins (Susan Walters) lurking around and Summer Newman Abbott (Alison Lanier) already made her appearance on Tuesday, bringing Allie along with her. So, who could it possibly be? Hopefully it’s not someone evil and menacing to get this marriage off to a rocky start. After all, most soap newlyweds get at lest a few good months before the dange and melodrama begin.

Will it be someone from Mariah’s past or Tessa’s or sosmeone not from the past? Maybe it will be Ghost Cassie (also Camryn Grimes), who hasn’t been seen in quite a while. If Ghost Cassie shows up for Sharon and Mariah, the show wouldn’t even have to hire a whole new actress for a guest appearance. So, let us hope Ghost Cassie wishes her sister well and Sharon (Sharon Case) has all her children among her this day. Stay tuned to The Young and the Restless weekdays to see how these stories play out.

Days Of Our Lives Spoilers: Lani And Paulina Have A Secret