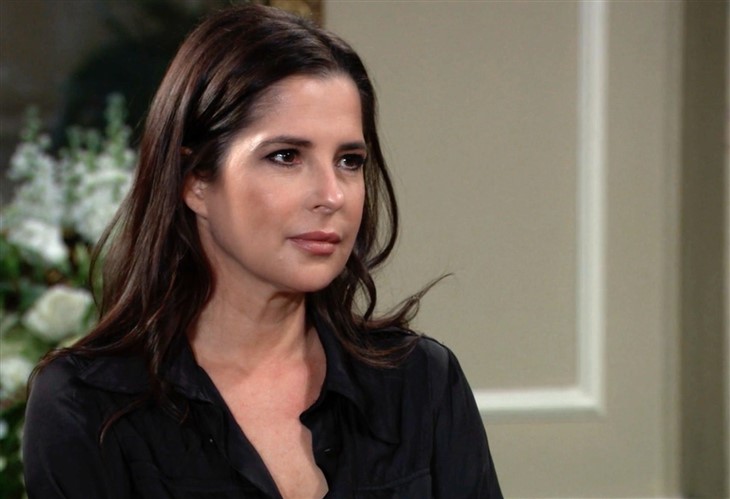 It looks like Cody Bell’s (Josh Kelly) nervous although he’s trying to be a tough guy as he tells someone if he stays out of his way, he won’t have to. Cody might have decided to give Mac Scorpio (John J. York) a call to try and find out what he really wants from him. Viewers will recall that he was spooked by the Scorpios at the Metro Court when he was on a date with Britt Westbourne (Kelly Thiebaud).

Felicia Scorpio (Kristina Wagner) approached him and gave him Mac’s cell phone number because Cody was very defensive about what Mac the cop wanted with him. He’s still defensive as Mac the potential birth father apparently tries to talk to him about their pasts.

Damian Spinelli (Bradford Anderson) is trying to weasel out if as Sam asks him what he hasn’t been telling her. He looks like someone whose mother’s caught him with his hands in the cookie jar, as Sam is noticeably impatient. It’s been suspected that Spinelli’s involvement in Society Setups is a lot more than just designing the software, and it’s possible it may be a front for an investigation. It looks like Sam might have to launch an investigation of her own into Spinelli if he doesn’t fess up. Spinelli is able to get a lot of personal information on people in the guise of a dating app, although he definitely has someone he answers to.

Trina Robinson (Tabyana Ali) visits her mentor, Ava Cassadine (Maura West) in her hospital room at GH, obviously needing to get something off her chest. After she confides in her, possibly about the secret she’s keeping from Cameron Webber (William Lipton) about Josslyn Jacks (Eden McCoy) Ava asks her is that so bad? Cameron had just confided in her about keeping a secret for Spencer Cassadine (Nicholas Chavez) that affected her, while she’s keeping a secret for Josslyn that could affect him.

Trina doesn’t like it now that the shoe is on the other foot, but how can she tell Cameron that Joss’s affections are being drawn away by Dex? Ava is obviously responding to Trina having talked to her about the dilemma instead of keeping it all inside.

At Maxie Jones’ (Kirsten Storms) apartment, she tells Austin Gatlin-Holt (Roger Howarth) she’s glad something’s out in the open now, perhaps she’s talking about Mac being Cody’s father. She’s assuming that all is going well with Mac and Cody’s meeting, but Austin looks a little concerned. Austin may be thinking about his own secret involving his cousin Mason Gatlin (Nathanyael Grey) and wishing he didn’t have it to keep. He’ll meet with Mason later, needing to confront him about an issue. It could be about whatever he was concerned with eliminating Ava as a witness to at the Quartermaine picnic.

Josslyn is at the Port Charles Police Department, where she’s talking to Detective Dante Falconeri (Dominic Zamprogna) about Dex. It really put her to thinking when she realized Dex had been at all three crime scenes and she tells Dante she’s there to share some evidence of her own. Dante had just finished questioning Dex and Sonny gave him a ride since he wasn’t under arrest.

Joss and Dante will brainstorm to try and solve the case of the Port Charles Hook, she wants to help any way she can. She was extremely upset when she realized that Dex might be responsible for not only Brando Corbin’s (Johnny Wactor) murder, but Diane Miller’s (Carolyn Hennesy) attack.

Sonny is warning Michael Corinthos (Chad Duell) to go home, because this doesn’t concern him. Obviously, Michael has found out that Dex is a person of interest in the Port Charles Hook attacks and Sonny’s demanding answers from Dex. Michael knows what might happen to Dex, who is his plant, if Dex doesn’t come clean to Sonny. That’s not going to help in this instance because Michael’s going to blow Dex’s cover with his concern for Sonny shaking him down.

It didn’t do Dex any good to deny knowing anything about how the attacks were made and that he didn’t see anyone at Brando’s garage. He’s even playing innocent to Sonny who doesn’t understand how Dex didn’t see Diane’s attacker when he was told to guard her. Sonny’s got him tied to storage racks in a room possibly in the back of either Pozzulo’s or Charlie’s Pub, probably Pozzulo’s.

Dex is scared almost to tears as Sonny bears down on him for answers. He doesn’t know how to make Sonny believe he didn’t see anything.