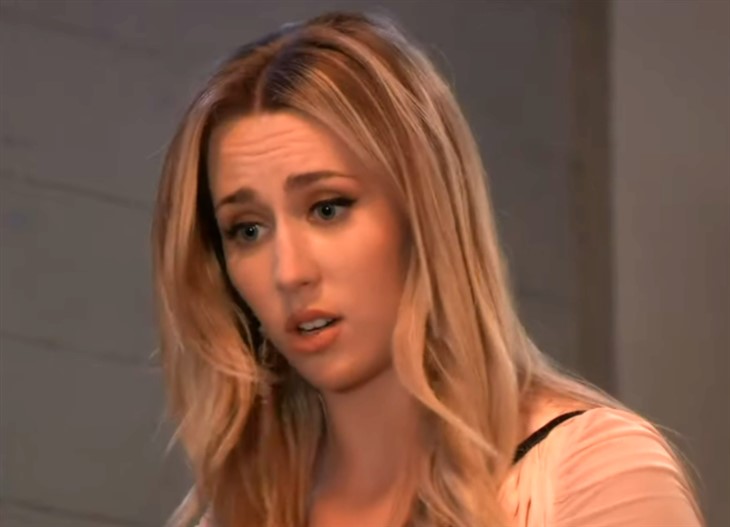 General Hospital spoilers reveal that the preview shows Josslyn Jacks (Eden McCoy) feeling like someone is watching her. With Sonny Corinthos (Maurice Benard) ordering Dex Heller (Evan Hofer) to watch his family, could Josslyn’s bad feeling mean she’s the next target? If so, will Dex die saving Josslyn’s life?

GH spoilers reveal that the people of Port Charles were stunned when a mysterious killer attacked Ava Jerome Cassadine (Maura West). Next, Brando Corbin (Johnny Wactor) would fall victim to the hook.

So far, there are only two victims. However, they both have one thing in common, which is Sonny. So, this makes Jordan Ashford (Tanisha Harper) wonder if someone is targeting Sonny’s loved ones.

Sonny told Dex to make sure to keep an eye on his family. Despite not being Josslyn’s biological father or being married to Carly Corinthos (Laura Wright) anymore, Sonny still considers them family. Sonny will never let any harm come to either of them. It doesn’t matter if Carly and Josslyn hate Sonny’s guts. Sonny will always be sure that they are protected.

Dex already has begun bonding with Josslyn, something she wants to keep hidden. However, there is reason to believe that Josslyn could be targeted next.

General Hospital spoilers for the week of September 19 reveal that Josslyn will get the sense that someone is watching her. This could just be Dex keeping an eye on Josslyn. However, it is more likely that it is someone else. Could this be the first hint that Josslyn’s life might be in danger?

Even though Brando and Ava survived the hook attacks so far, there will be a death. Whether that is Brando, Ava or someone else remains to be seen.

There is no word on McCoy leaving the ABC soap. Plus, Dante Falconeri (Dominic Zamprogna) is suspicious of Dex. Michael Corinthos (Chad Duell) is continuing to bark orders at Dex while trying to get revenge on Sonny. Then, there is Sonny being uncertain whether to fully truth Dex or not.

With everyone having suspicions and not trusting Dex, could there be a redemption story? Could the big bad hook go after Josslyn, only for Dex to die saving her life? With soaps, anything is possible.

Who do you think tried to kill Ava and Brando? Which Port Charles resident will be targeted next and why? Could Dex get the ultimate redemption by risking his life to save Josslyn’s? Share your thoughts and remember to keep watching the ABC soap to see what happens next.