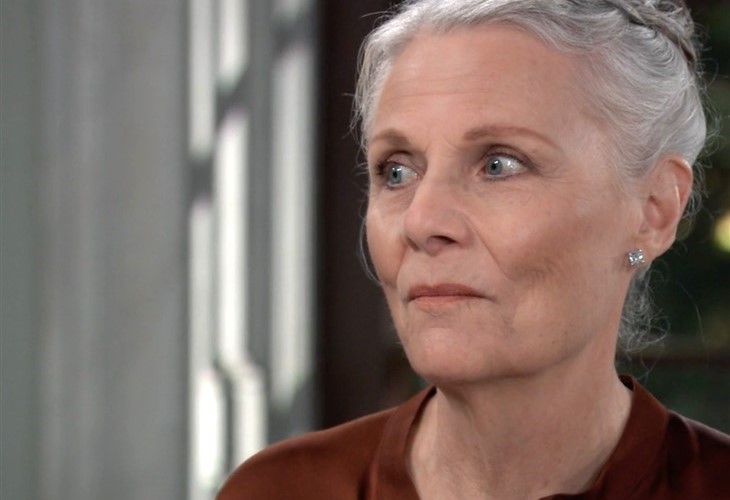 General Hospital (GH) spoilers tease that things won’t be looking so good for Tracy Quartermaine (Jane Elliot) when she wakes up in captivity in an upcoming episode of General Hospital! Where will she wake up, and why is she there will be the questions foremost in her mind!

Other General Hospital spoilers tease that Ned and Olivia Quartermaine (Wally Kurth, Lisa LoCicero) will have a vow renewal ceremony the episode before things don’t look so good for Tracy. Considering Tracy and Olivia have not gotten along so well and don’t really like each other that well, no one would be too surprised if Tracy didn’t attend, and the last time she was seen was onboard The Haunted Star.

General Hospital viewers will recall Tracy had tried to deliver a small box to Laura Collins (Genie Francis) indicating it belonged to her, and Laura told her if it was the Ice Princess diamond she didn’t want it! Laura told Tracy to dump it in the ocean with Luke Spencer’s (Anthony Geary) ashes, and Tracy said she couldn’t do that, but the reason wasn’t revealed, although Jennifer Smith (Holly Gagnier) showed up unexpectedly afterwards! Bad things always seem to happen on The Haunted Star, and Tracy’s abduction may have been one of them!

GH Spoilers – Tracy Quartermaine Wakes Up – But Where Is She, Who Took Her, And Why?

General Hospital viewers know that this sounds way too much like Victor Cassadine’s (Charles Shaughnessy) work, and General Hospital viewers will remember he showed up at Luke’s memorial service before being booted out by Laura! Tracy, much like Liesl Obrecht, (Kathleen Gati) wakes up in a nicely appointed room but she’s locked in – there is a nice pair of silk pajamas on the bed and even her favorite alcoholic refreshments.

Viewers will recall that even though the Cassadine Compound in Crete and the Cassadine Castle in Greece were raided, Drew Cain (Cameron Mathison) was worried about the other woman he heard screaming when he was in captivity. Chances are, there is still another compound that Victor owns where the other woman was moved to, and that is likely where Tracy is too! Tracy is not one to just put up and shut up, and you can believe that she will trying to break out of her lavishly appointed prison – with a good dose to the next guard that shows up of “Do you know who I am?!”

General Hospital Spoilers – Victor Cassadine Will Be Accused But It May Not Be Him-Directly!

General Hospital viewers can pretty much bet that once it’s realized that Tracy is missing, Victor will be accused of her kidnapping, because she had the Ice Princess diamond, but it may not be him! Victor may have been interested in the diamond but that would be too obvious so if he is behind Tracy’s kidnapping it is likely he had an “associate” or associates commit the actual crime.

Plus, he’s being kept busy with finding Louise August (London and Jett Prinzo-Berendt) for Peter August (Wes Ramsey) in exchange for the method to control Drew; still, General Hospital viewers will recall that Victor was behind Luke’s cable car accident. He called someone and told them they could take the hit off Laura and Martin Grey (Michael E. Knight) because Luke had been “neutralized” so it’s likely that same someone he called to order to kidnap Tracy!