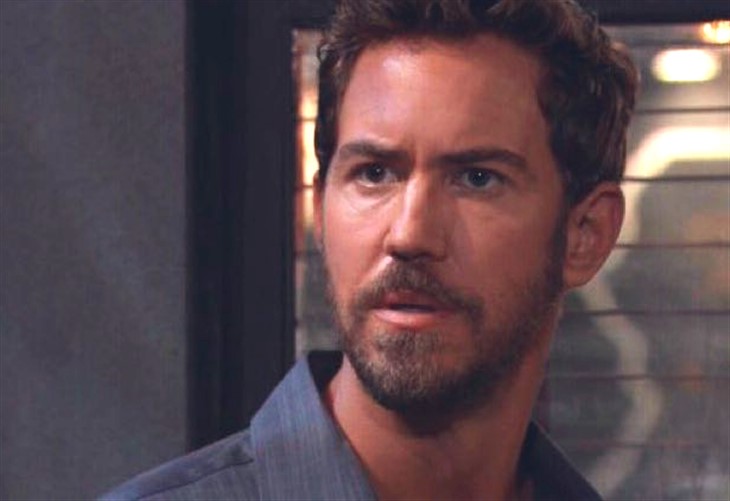 General Hospital spoilers for Friday, January 28, 2022, reveal a bad day for the citizens of Port Charles because it looks like that menacing, hissing, can’t-be-killed, pathetic villain Peter August is about to use his get out of jail free card.

While Maxie Jones’ (Kirsten Storms) scheme to keep Peter August (Wes Ramsey) away from her baby is a hot mess that has gone awry in every conceivable way, who can blame the woman for wanting to do this? Sure, she has told all the wrong people and refuses to trust the right people, and is now manipulating Austin Holt (Roger Howarth), but what’s a girl to do?

Well, now Victor Cassadine (Charles Shaughnessy) knows the truth, Valentin Cassadine (James Patrick Stuart) knows the truth, and Peter knows the truth and Peter has convinced Victor to spring him from GH before he ends up back in Pentonville. As Dante Falconeri (Dominic Zamprogna) arrives to do just that, it looks like Victor is about to put his plan into action right with Valentin there? Will the Cassadine with the better angels on his back save the day?

Meanwhile, Brook Lynn (Amanda Setton) and Harrison Chase (Josh Swickard) remain completely oblivious to the fact that their secret is no longer a secret and continue to flirt with one another. Yes, Brooke keeps walking in on her roommate in various states of undress.

Stella Henry (Vernee Watson) is back in Port Charles once again and visits with Curtis Ashford (Donnell Turner) at Charlie’s where they discuss Marshall (Robert Gossett). Curtis is still not happy with his father although he tried to give him a chance, so he wants to know why Stella is being so nice to him and giving him a pass.
Meanwhile, Marshall and Epiphany (Sonya Eddy) cross paths at Kelly’s and have quite an interesting discussion. Will these two actually embark on a romance?

Perhaps Esme Prince (Avery Pohl) didn’t need to slip any drugs into Trina Robinson’s (Sydney Mikayla) drink because that little game the teens played caused enough tension between Trina and Josslyn Jacks (Eden McCoy). Even Joss can tell Esme is reveling in Trina’s misery and asks Cameron Webber (Will Lipton) if he can finally see Esme for who she truly is. As Cam and Joss argue, does anyone want to check on a drugged Trina? Stay tuned to General Hospital weekdays to see how these stories play out.