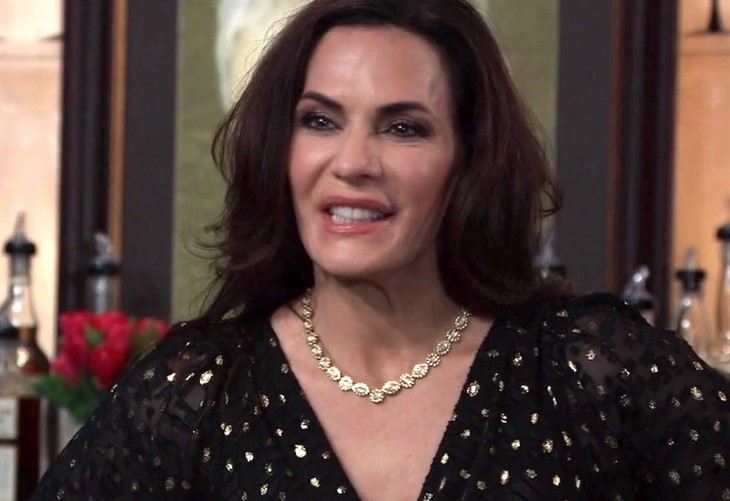 General Hospital spoilers and rumors tease that Jennifer Smith (Holly Gagnier) could be working with Selina Wu (Lydia Look) in an ultimate plot for what’s left of the Smith and the Wu crime families to combine, and then take over Sonny Corinthos (Maurice Benard) territory in upcoming episodes of General Hospital!

Selina is out of town currently – and regardless of what she told her nephew Brad Cooper (Parry Shen) she might be on the west coast setting up the new territory. General Hospital viewers will remember that Jennifer told the person she called that Sonny wasn’t interested in expanding into Cyrus Renault’s (Jeff Kober) old western territory, and therefore the person should build and become strong in that territory first.

If this is Selina, Jennifer was talking to, it would seem that she is double dealing Sonny and planning to betray their friendship by eventually taking over his territory on the East Coast teamed up with Jennifer! Longtime General Hospital viewers will recall that when Sonny first came to Port Charles he had been working for Jennifer’s father, the late Frank Smith (George Gaynes) and eventually took over his territory.

It sounds like Jennifer might want it back but she doesn’t have a big enough mob presence or enough henchman to do so, and it is the same with Selina – the two female crime family leaders teaming up makes a lot of sense!

General Hospital spoilers hint that even though Jennifer seems to be holding off until her partner currently on the West Coast is bigger and stronger, Sonny is in perfect shape for his territory to be taken over! General Hospital viewers know that with Jason Morgan (Steve Burton) gone, he has no enforcer, and he is emotionally overwhelmed enough to be distracted from the business with him and Carly Corinthos (Laura Wright) possibly headed for divorce!

Plus, Sonny is off his meds – he’s been heavily drinking and spiraling downward faster and faster, and Jennifer may have noticed that Sonny was “off” the short time she saw him on the Haunted Star at Luke Spencer’s (Anthony Geary) memorial service. Brick (Stephen A. Smith) and Cyrus both warned Sonny there was a player on the West Coast that was a threat – and Selina has been conveniently absent from Port Charles during that time!

Jennifer was obsessed with Luke for years, even though she eventually had married someone else, and assuming Luke is really dead, he is no longer her focus or her distraction. When her father was still alive, women didn’t do mob boss but she is the only one left alive to carry on the Smith family mob legacy and now she is free to focus on it without any distractions.

General Hospital spoilers show that with Cyrus having been taken down and incarcerated, whether he’s found religion or not, he’s not running his old territories from prison and that does leave a considerable territory if not several ripe for the picking! Sonny didn’t want them and they have been up for grabs, making it a prime time for Jennifer to come into her own as head of the Smith mob family and teaming up with Selina makes it a sure thing!