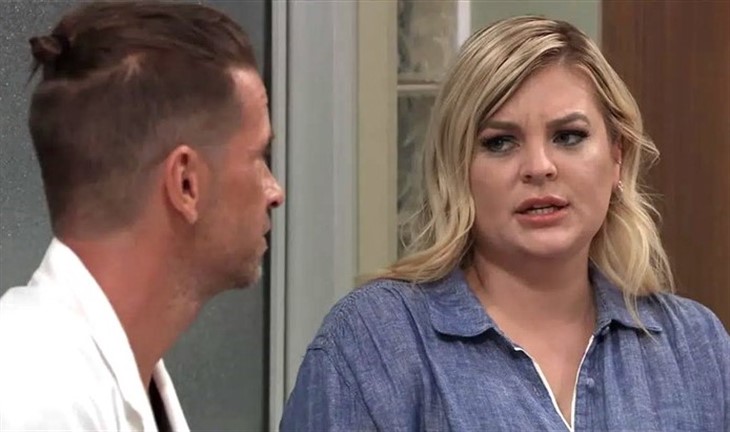 General Hospital (GH) spoilers for Thursday, January 27, 2022, reveal Maxie Jones this close to caving and telling Austin Holt everything about the night Bailey Louise was born.

General Hospital Spoilers – Austin Holt Is Ready For The Truth

Austin (Roger Howarth) knows what he heard the night he delivered Maxie’s (Kirsten Storms) baby but he wasn’t about to say that in front of Felicia Scorpio (Kristina Wagner) and Anna Devane (Finola Hughes) because he can tell Maxie is keeping a secret for a reason. As she scrambles to come up with a plausible story for his questions, it gets harder and harder. Austin assures her she can tell him the truth and she is about to do it.

But will she? Or will she chicken out at the last minute and still keep this helpful and suspicious man in the dark after he has done so much for her. She is keeping her super-spy mother and godmother in the dark when they just want to help her and actually can and other people are getting dangerously close to the real story.

Victor Cassadine (Charles Shaughnessy) already knows what’s going on and he’s about to tell Peter August (Wes Ramsey), but Valentin Cassadine (James Patrick Stuart) also suspects something and he’s determined to find out what it is.

When Nina Reeves (Cynthia Watros) runs into Carly Corinthos (Laura Wright) at the yoga studio, she does her best to tell her what’s been going on with Sonny (Maurice Benard) and his bipolar meds, but since Carly gets nasty and runs off at the mouth the same way she did the day Nina found Sonny in Nixon Falls, Nina figures why bother telling this woman anything since she has nothing but horrible things to say to her.

Soon, Sasha Gilmore (Sofia Mattsson) walks in and causes a stir. Carly turns her attention to Sasha, who may or may not be taking cocaine again. Meanwhile, Sonny runs into Brando (Johnny Wactor) at the hospital and they have a heart to heart conversation.

It was a big day of skiing for the Port Charles college set and now they have settled in for a fun night of games around the fire. While Josslyn Jacks (Eden McCoy) and Cameron Webber (Will Lipton) plan to have sex for the very first time, Esme Prince (Avery Pohl) has other plans for them, as well as for Trina Robinson (Sydney Mikayla). Do those pills she was carrying have something to do with her plans? Stay tuned to General Hospital weekdays to see how these stories play out.