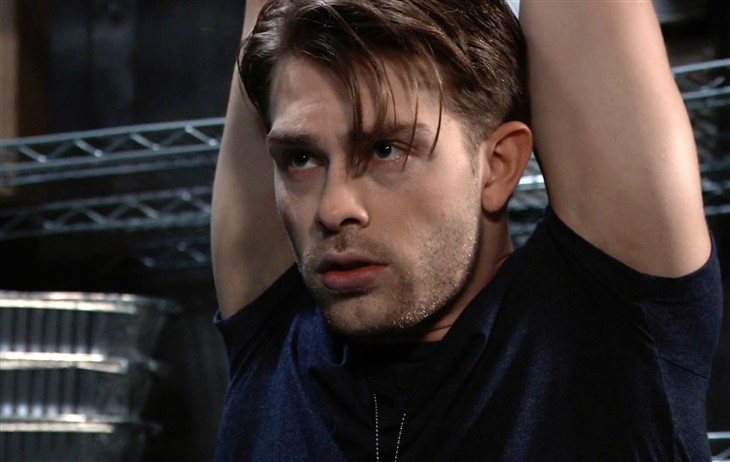 General Hospital spoilers reveal Jordan warns Portia that this secret will come back to haunt her. Portia let it slip months ago that she needed to tell Trina the truth about her father. However, Portia continues to act like she doesn’t know what Jordan is referring to. Can Jordan convince Portia to be honest with Curtis Ashford (Donnell Turner) and Trina?

Ava tells Trina she can’t be her boss anymore but forgot to tell her the exciting part. Trina loves working at the gallery but Curtis is afraid she might get hurt there. Will Ava arrange a job somewhere else so she can help keep Trina safe? Will Trina accept that she cannot work for Ava anymore?

GH Spoilers – Is Austin Holt Part Of A Mob Syndicate?

Mason (Nathanyael Grey) insists Austin Gatlin-Holt (Roger Howarth) do some heavy lifting. Austin has been trying to separate himself from Mason and the rest of the family. However, everyone insists that Austin return to Pautuck. There seems to be business that Austin needs to attend to. Will Austin finally go home as he has been ordered?

Maxie Jones (Kirsten Storms) wants Cody Bell (Josh Kelly) to get to know Mac Scorpio (John J York). Mac knows that he could be Cody’s father. However, Cody is convinced that Leopold Taub (Chip Lucia) is his father. Maxie let it slip that Mac could be Cody’s dad. Cody wants no part of Mac. Will Cody listen to Maxie and give Mac a chance?

Sam McCall (Kelly Monaco) warns Damien Spinelli (Bradford Anderson) to take down Society Setups now. Spinelli has confessed to Sam that he could go to prison over this dating app. Sam also knows how close Spinelli came to going to federal prison before. Can Sam save Spinelli from himself before he gets in way over his head?

Josslyn Jacks (Eden McCoy) defends Dex Heller (Evan Hofer). Josslyn doesn’t believe that Dex could hurt let alone kill someone. Josslyn has gotten close to Dex and doesn’t believe he could be a killer. Dex has been far too nice and helpful to Josslyn. Can Josslyn convince Dante Falconeri (Dominic Zamprogna) that Dex is innocent? Can someone save Dex from Sonny before it’s too late?

Sonny Corinthos (Maurice Benard) demands to know why Michael Corinthos (Chad Duell) thinks Dex is innocent. Will Michael reveal that Dex works for him to save his life? Can Michael walk away and allow Dex to be killed to cover his secret? Will Dex become collateral damage?