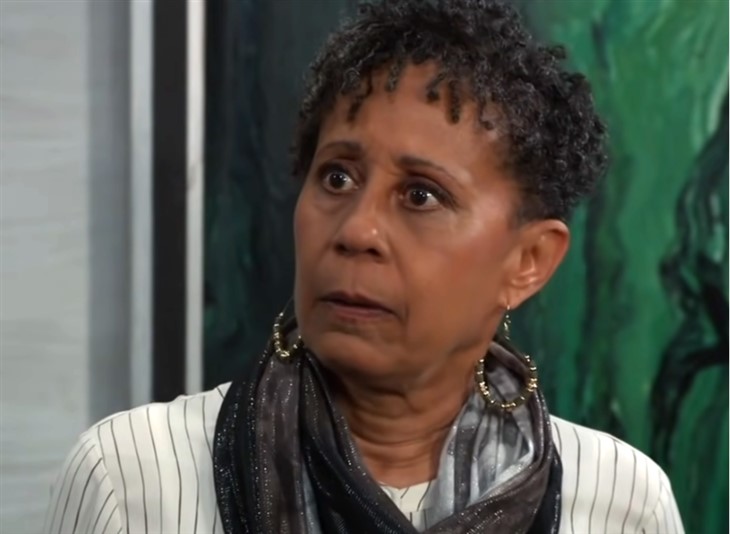 General Hospital Spoilers hints trouble is brewing in paradise for Portia Robinson (Brook Kerr) and Curtis Ashford (Donnell Turner). As Portia continues to hold onto a secret that will rattle Curtis to his core, Stella comes clean about a milder one, and it implicates Jordan Ashford (Tanisha Harper). Curtis will struggle to put his feelings about soon-to-be ex-wife Jordan to the side.

General Hospital Spoilers – Everything Was Perfect

General Hospital spoilers show Curtis’ problems are just getting started. With mob boss Selina Wu (Lydia Look) hovering over Curtis’ every move at his club —- The Savoy, he’s been stressed by his own failure to uphold professional ethics in the way he runs his business. He may even be wondering whether his plan to sidestep private investigation to be a club owner was really worthwhile. Just when he thought things couldn’t get worse, he starts to question the one thing he is sure about: his fiancé Portia Robinson (Brook Kerr).

Portia has been keeping her daughter, Trina Robinson’s (Tabyana Ali) real father from her for her entire life. How Curtis will react when he finds out he’s Trina’s dad is anyone’s guess. But Jordan is growing suspicious, and the stress of keeping so many secrets from Curtis is eating her alive. Yes, secrets.

Jordan and Curtis were supposed to be divorced already. The papers were to have been filed one year ago. Only recently did the couple find they never were. Now they’re rushing to get a new set of papers drafted to sign and send off to the courthouse. Curtis is eager to make Portia his new bride, and he was angry with Jordan for letting such an important detail like their divorce papers fall through the cracks. He ever suspected it could’ve been intentional on Jordan’s part.

This pair was married long enough to know when one of them is lying, and Curtis knows something isn’t right. Could it be he’s picking up on the real secret Jordan is keeping —- that Curtis’ aunt, Stella Henry (Vernee Watson) is actually responsible for the divorce that never happened, and Jordan has been covering for her?
GH Spoilers Indicates the Truth Will Come Out, and Curtis Won’t Understand His Feelings

Stella is going to confess the truth to Curtis. She’s been struggling with keeping it to herself and cannot stand for Curtis to have any doubt about Jordan’s desire for him to be happy with Portia. Curtis will accept Stella’s apology and move forward, but he’s going to have a hard time avoiding overthinking why Jordan covered for Aunt Stella. Could it be Jordan still loves Curtis so much that she would want to spare him even the most minor of difficulties with his dear auntie? Stay tuned for the next round of updates on this story; it’s only getting juicier!