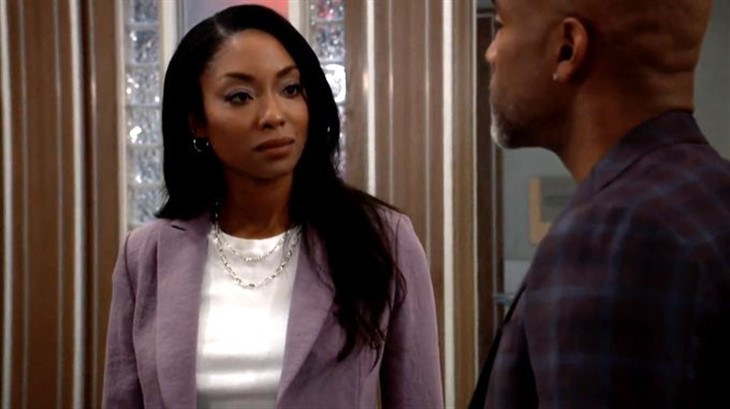 General Hospital (GH) spoilers teases Jordan Ashford (Tanisha Harper) may not have learned her lesson from her divorce from ex-hubby Curtis Ashford (Donnell Turner), but it seems like she has learned a thing or two from her first divorce. Make no mistake, Jordan doesn’t let the past drag her down, and she won’t allow anyone else to shame her for past decisions, but she’s carried plenty of regret of her own.

Perhaps working in law enforcement has rubbed Jordan the wrong way, but she knows how to keep a secret—even from those she loves. During her first marriage to Curtis’ brother, Tommy Ashford, Jordan had an affair with Shawn Butler (Sean Blakemore). That affair would come to produce Jordan’s son, T.J. Ashford (Tajh Bellow) — a child Tommy would believe to be his own before discovering otherwise and facing his death during an attack on Shawn in retaliation.

Fast-forward to today, and we’re one year out from Jordan and Curtis’ separation and subsequent divorce, which happened on the heels of Curtis discovering Jordan lied to him about several of the circumstances surrounding Cyrus Renault’s (Jeff Kober) crimes, Marcus Taggart’s (Réal Andrews) staged death, and T.J.’s abduction at the hands of Renault.

As it turns out, Curtis’ aunt, Stella Henry (Vernee Watson) took it upon herself to dispose of the former couple’s divorce papers before they could be filed with the court. The end result? Jordan and Curtis are still married, which puts quite a cramp in Curtis’ plans to wed his current love, Portia Robinson (Brook Kerr) — whom he had a love affair with years ago. This has brought up feelings on both sides of the aisle about why Curtis and Jordan dissolved their marriage in the first place.

GH Spoilers — Jordan’s Not the Only One Keeping Secrets

Jordan stepped in and took the blame for the missing divorce papers to spare Aunt Stella of any backlash from Curtis. But Curtis senses something is wrong. Is it just the Aunt Stella cover-up that has his PI instincts naggingat him, or could he be picking up on Jordan’s suspicions of Portia?

Either way, it seems Jordan isn’t down with keeping another dear old dad in the dark anymore. Will Curtis forgive Portia for lying to him when he couldn’t forgive Jordan of the same? Will he hold it against Jordan for not coming to him with the truth about Trina sooner? Check back with us daily for more spoilers on the Ashford-Robinson-Ashford love triangle.