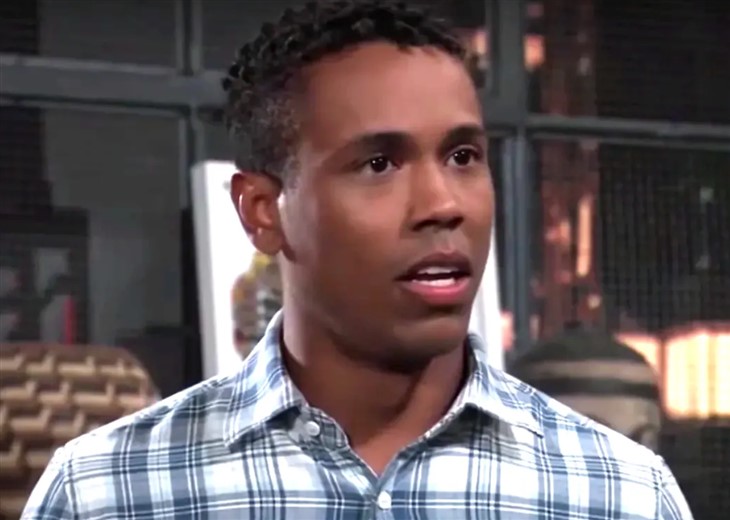 TJ had accidentally given his mother, Jordan Ashford (Tanisha Harper) another clue about Portia Robinson’s (Brook Kerr) secret; she had previously overheard Portia talking about genetic counseling. This was for Trina Robinson (Tabyana Ali) not herself, and mentioned it was from her paternal line; TJ mentioned when Auntie Stella looked for relatives through an ancestry website.

Jordan knew that Marshall Ashford (Robert Gossett) left his family because he found out he had schizophrenia and they had talked about it.

TJ had remembered that before Auntie Stella, who is Curtis Ashford’s (Donnell Turner) aunt found a cousin in London, she’d found a relative in Port Charles. TJ has a hunch and as he and his mom talk about Stella’s story, he admits the whole thing never sat right with him.

The whole Ashford clan is still at the Savoy at Trina’s party, and Curtis and Portia have a request for Stella. She looks down and spots Portia’s large engagement ring and exclaims, “Wait a minute – what is this?!” Curtis and Portia’s request may have something to do with planning their wedding, although it could also be something else.

It seems like they may want her to be Portia’s matron of honor, since Portia has never mentioned relatives of her own other than Trina. Later in the week, Stella will come to them with some shocking news, but for now it’s all celebration at The Savoy.

Sonny Corinthos (Maurice Benard) had come to ask Curtis a favor regarding booking Harrison Chase (Josh Swickard) at The Savoy. Curtis, however had reacted very negatively and actually wouldn’t even listen to Sonny’s request. Marshall heard the two of them sounding like they were starting to get into an argument and looked over Sonny’s way.

Marshall now takes action and approaches Sonny, and tells him he thinks it’s best for him to leave, although respectfully as he calls him “Sir.” Sonny’s longtime adversary Marcus Taggert (Réal Andrews) stands in the background ready for action if it’s needed.

Josslyn Jacks (Eden McCoy) and Cameron Webber (William Lipton) are also still at The Savoy, where Josslyn had told Cameron about dumpster diving for Avery Jerome-Corinthos’ (Ava and Grace Scarola) bracelet. He had asked her why she didn’t call him to come help her, and she seems to be keeping quiet the fact that again, Dex Heller (Evan Hofer) had helped her.

Josslyn looks more than a little bit annoyed as Cameron tells her she’s the one keeping all the secrets, she’s obviously on the defensive about Dex.

Josslyn seems to be feeling torn between her longtime boyfriend Cameron and this more exciting new guy, Dex. She has no idea that he’s her brother Michael Corinthos’ (Chad Duell) plant to take down Sonny’s businesses.

A sad looking Spencer, bound for his three month stint in Pentonville Prison tells someone there is something he’d like to tell them; it’s more than likely Trina. No one can blame him for wanting to come clean with her before he enters the prison.

GH Spoilers – Another Meeting At The Cemetery

Spencer had been at the cemetery putting flowers on his mother’s grave when Trina saw him, and that was his alibi for her and also the reason he’s going to Pentonville. Another unexpected cemetery meeting appears to be taking place, this time between Willow Tait (Katelyn MacMullen) and Nina Reeves, (Cynthia Watros).

Nina will come face to face with her past while Willow has a nightmare, and both scenarios seem to be referring to Willow’s unknown twin, Nelle Benson (Chloe Lanier).

Nina and Willow have a fraught encounter as Willow stuns Nina with her reason for being there. She tells her actually, she’s at the cemetery at night for Nelle.

GH Spoilers – When A Door Closes, A Window Opens

There’s a saying that when a door closes, a window opens, meaning there is always another way to get things done if the original one doesn’t work out. Carly Corinthos (Laura Wright) appears to be talking about her lost hotel and looking forward to another business opportunity. Perhaps someone is telling her about this famous saying when she smiles and tells them that she thinks she has a door.

Carly plans to go to a business seminar soon and she’d temporarily delayed because of the Ava Cassadine (Maura West) attack drama and Josslyn being involved in finding her. It looks like now Carly may be moving forward on it.

Back at The Savoy, Sonny is talking to Selina Wu (Lydia Look) who may be coming to the rescue regarding the promise he made Brook Lynn and Chase. Selina, too, has connections to clubs and music venues and appears to be into a little bit of everything. She makes him an offer, and he’s positive about what he hears.

Sonny tells Selina that he’ll keep her offer in mind. It sounds like he’ll think it over and get back to her about it.

Y&R Spoilers: Adam And Jack Team Up, Victor In The Fight Of His Life?

Days Of Our Lives Spoilers: Sarah and Xander Finally Tie The Knot