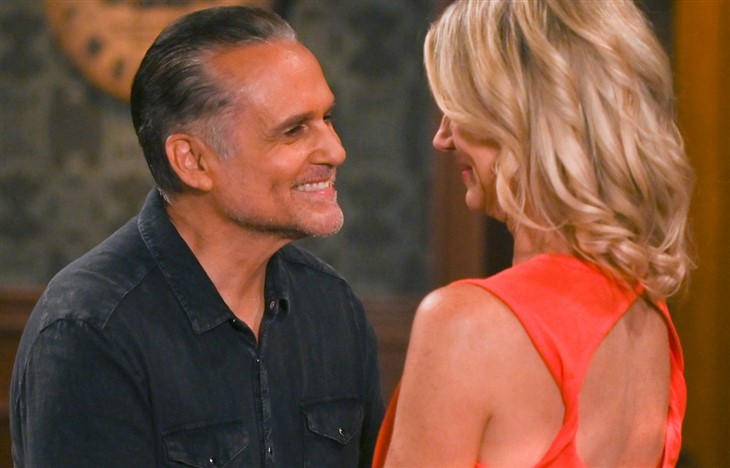 General Hospital (GH) spoilers tease that Nina Reeves (Cynthia Watros) has been living in a bit of a fantasyland. She fell in love with Sonny Corinthos (Maurice Bernard) when he had amnesia and believed that he was a bartender named “Mike”. But even as Sonny and Nina get closer, possibly even moving in together, Nina will be in for quite the rude awakening. Sonny is certainly leaning more into his “mob” personality of late, and that may be more than Nina is prepared to handle.

If Nina thought that Sonny was always just going to be “Mike”, recent events will cast doubt. While Mike was for the most part a simple and gentle man, the real Sonny is nothing like that. At his very core, Sonny is as ruthless as one would expect from a mob boss. The more Nina sees that version of Sonny, the more she will realize that her romance with him may not fit into his world. It’s hard to imagine Nina condoning the type of violence that Sonny lives in his daily life. But she may not realize just how different “Mike” and Sonny are until she is living with him.

Sonny tends to take the law into his own hands. The most recent example is sleazy photographer Felty (Brian Norris). Hearing from Brando Corbin (Johnny Wactor) that Felty provided Sasha Gilmore (Sofia Mattsson) with drugs, Sonny took action. With the help of hired muscle Dex Heller (Evan Hoffer), Sonny had Felty beaten and threatened to kill him. While there is no doubt that Felty deserves punishment, Nina may be shocked at just how far Sonny was willing to take it. If Nina discovers what Sonny did to Felty, it could finally show Nina that she doesn’t know Sonny as well as she thinks.

Once Nina confronts Sonny about the Felty situation or something similar, the couple might find themselves at a crossroads. Sonny isn’t the type of person who is used to having his actions questioned by anyone and Nina will likely have plenty of them. Nina knows what Sonny does, but until she sees first-hand what he is capable of, she may have blinders on. But what happens when those blinders are removed? Can this couple find a common ground or are they just too different?

Will Sonny and Nina move in together? Is Nina prepared for the realities of Sonny’s lifestyle? Or will this couple find that what they had in Nixon Falls can’t be recreated in the real world? Anything can happen in Port Charles so stay tuned to General Hospital airing weekdays on ABC. And don’t forget to check back right here regularly for all your General Hospital news, information, and spoilers!