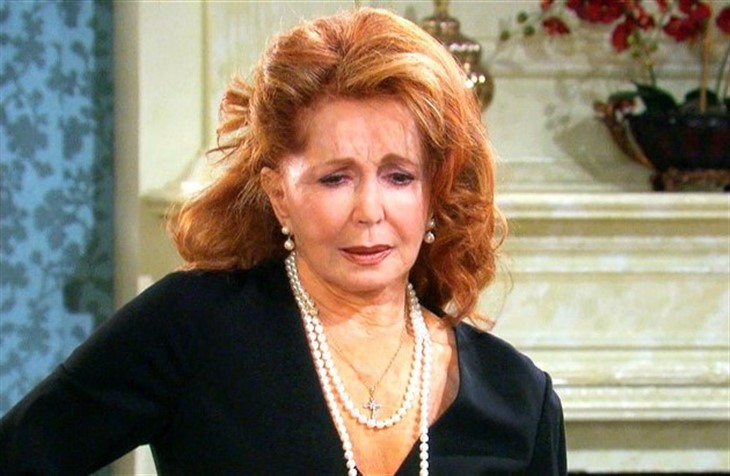 Days of Our Lives spoilers and updates tease that Maggie Kiriakis (Suzanne Rogers) will soon get an eyeful at the Kiriakis Mansion. Might she spy a skinny dipping Alex Kiriakis (Robert Scott Wilson)?

Days Of Our Lives Spoilers – A Rather Relaxed Attitude

Alex hit the Kiriakis mansion with a rather relaxed attitude, coming in from the pool soaking wet and sitting on the furniture just as soaking wet. Maggie and Victor Kiriakis (John Aniston) weren’t home at the time, but Sonny Kiriakis (Zach Tinker) was and Bonnie Kiriakis (Judi Evans) had quite the greeting. Justin Kiriakis (Wally Kurth) soon came home and was pleasantly surprised to see his oldest son, who said he’s staying around a while.

Alex doesn’t look like he gives a hang about what anyone thinks about what he says and what he does. He’s out for a good time while he’s in Salem, and already talked about working at Titan while he’s there.

Shy is definitely not a word that would describe Alex – he just seems to move in and make himself at home. He wasn’t wearing a lot when Bonnie first saw him but then he had just gotten in out of the swimming pool. He just seems like a guy that wants to have fun and doesn’t care how he has fun or who sees him. At least he had his swim trunks on when he made his grand entrance back home for the first time in years. But he also seems the type to not really care how much someone sees of him, and that could get interesting – very interesting.

Days Of Our Lives Spoilers – Maybe Drunk And Wet?

Alex seemed to enjoy his cold Arnold Palmer, which can either be alcoholic with liquor added or not, half each of lemonade and iced tea. With Maggie home, there may no longer be a lot of liquor in the house since she has had her struggles with alcoholism in the past. However, Alex is a fun loving guy, and he might enjoy a beer or something a bit stronger once in a while.

Drunk and wet don’t always go together in a polite way, however, and someone could forget to put clothes on around the house. It happens – and when there are young and fun loving guys sometimes it happens more often.

Maggie comes home and gets an eyeful – she may not even realize who Alex is, it’s been so long since he’s come for a visit. She might spy with her little eye something she can’t unsee – perhaps Alex has decided to skinny dip and comes back in the living room in his birthday suit. If she doesn’t realize or recognize who he is that could be quite an eyeful. It may even be cause for a call to the police or security.