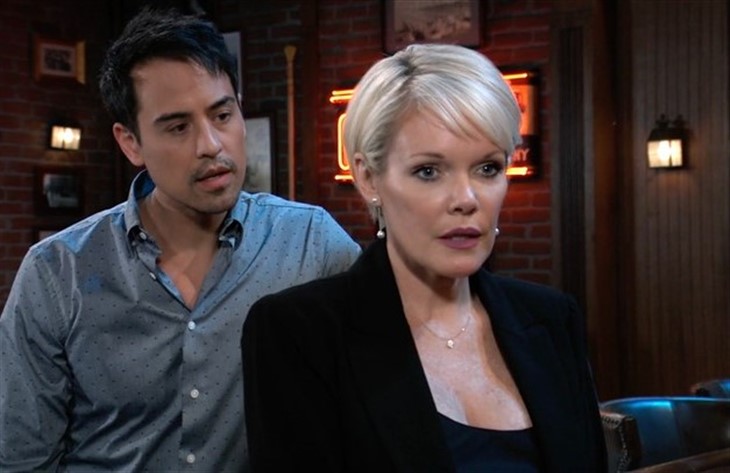 General Hospital viewers will see that Nikolas and Ava are comparing notes as Victor has been requesting meetings with the two of them separately; something that seems odd to both of them. Ava has noted that the elder Cassadine at times has seemed semi-flirtatious with her, and yet it just seems to be his way, and Nikolas agrees, he’s not trying to come on to her, he just likes to use his Cassadine “charm.”

However, General Hospital viewers will also note that Victor seems to be asking a lot of questions of Ava – especially as to what that feud between herself and Spencer Cassadine (Nicholas Chavez) has been over something his son Valentin Cassadine (James Patrick Stuart) did! Ava tells Nikolas she hasn’t been forthcoming with Victor over that – she doesn’t understand why Victor needs to know; it’s ancient history, Spencer was still a little boy and now that they have Wyndemere and Cassadine Industries back from Valentin why should Victor care?

General Hospital viewers can expect that Nikolas will fill Ava in on what Victor has been talking to him about as well, which mainly consists of unifying all the Cassadines as a family. Victor has been warning about a common enemy of them all that he apparently knows of, one who could strike at any moment; Nikolas cannot think of anyone who that might be, however.

General Hospital viewers will recall Victor speaking of the need for all the Cassadines to come together as a family, which he had started doing beginning with crashing Alexis Davis’ (Nancy Lee Grahn) Thanksgiving Dinner. The Cassadines were more dysfunctional with each other than a houseful of Quartermaines, and Victor had to whistle like a referee in a room full of impertinent two years old to call order!

As Nikolas and Ava compare notes on the information Victor has both given and requested from the two of them, General Hospital viewers will see them wonder if Victor is using them, mainly to get information about Spencer! Victor has asked many questions of Nikolas about what Spencer was like as a little boy, and about some of the things he did as a child; seems innocent enough, but what does Victor really want?

He has also asked both Nikolas and Ava about that codicil that Mikkos had written, disinheriting Valentin and implying he was not of Cassadine blood, and what happened to it. Why would Victor want to know about that – it really seems to be a puzzle especially since he’s claiming to be Valentin’s birth father, wouldn’t he have known something over the years? The two of them agree though at least Nikolas’ inheritance and legacy are not being questioned – if Victor really is Valentin’s birth father, he’s got his own properties to leave to Valentin when he dies!