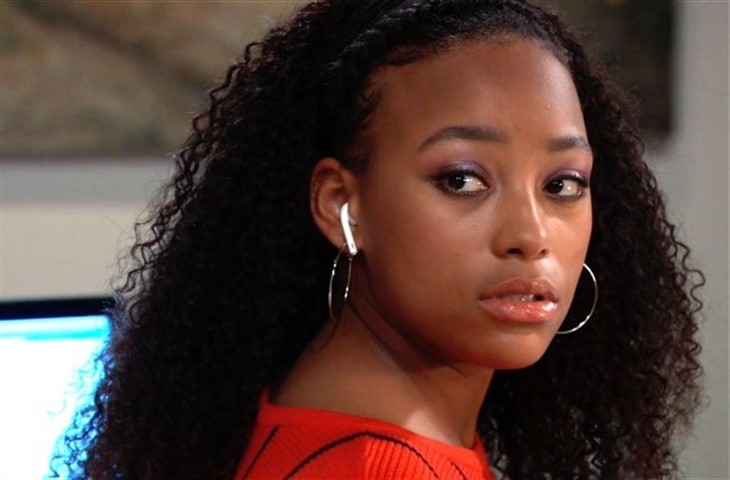 General Hospital (GH) spoilers and updates for Friday, March 4, 2022 tease confrontations, revelations and requests for help as well as warnings on the next General Hospital!

General Hospital spoilers tease that Cameron Webber (William Lipton) and Josslyn Jacks (Eden McCoy) will have an awkward cross with Trina Robinson (Sydney Mikala); Trina seems very upset at Joss, as she wants to know what part of confidence she doesn’t understand!

This seems to be related to Esme Prince’s (Avery Kristen Pohl) interference between the friends and her revenge on Trina which will really ramp up next week on General Hospital, when the video Esme took on their trip is publicized.

Elsewhere, Sasha Gilmore (Sofia Mattsson) and Brando Corbin (Johnny Wactor) wake up together for the first time in months, obviously excited about their upcoming vacation trip to Niagara Falls.

Sasha looks happy for the first time in months as Brando tells her they have an entire vacation to find out! Viewers will recall that she’s been depressed and trying to handle her grief over their lost baby with work, and now she’s dabbling in drugs again as well-is that where her happy is coming from?

Ava seems offended as she questions “Don’t you trust me?” and it may be to Ava alone that Laura reveals that new details have come to light about Victor’s duplicitous shenanigans, including his connection to Luke Spencer’s (Anthony Geary) death.

Elsewhere, Anna Devane (Finola Hughes) worries about some of the same new details, and has a warning for Drew Cain (Cameron Mathison); she has a feeling that Drew is headed for danger. Viewers will recall that Victor still hasn’t gotten the information he wanted to be able to control Drew, and had told his henchman Johann Bauer (Max Decker) now that Peter August (Wes Ramsey) is dead, he’ll have to get it another way!

Elsewhere, likely within the walls of Spring Ridge where Spencer Cassadine (Nicholas Chavez) is still incarcerated, he asks Victor for help with something.

General Hospital viewers will recall that Victor helped get Spencer a deal where he only had minimum time behind bars, but even though Spencer is comparatively safe, he tells Victor there has to be something he can do for him!

Meanwhile, at the Metro Court, General Hospital viewers see Nikolas Cassadine (Marcus Coloma) at the bar apologizing for something he’d never told Carly Corinthos (Laura Wright) before; viewers will remember when he first appeared alive in Port Charles, Carly was one of the few persons who knew!

Elsewhere, Sonny Corinthos (Maurice Benard) is talking to someone and tells them he wishes he could do something, but he apparently doesn’t believe it!

B&B Spoilers: Brooke Gets Upper Hand, But Taylor’s Not Out Yet

The Bold And The Beautiful (B&B) Spoilers: The Spencer Men Are Back