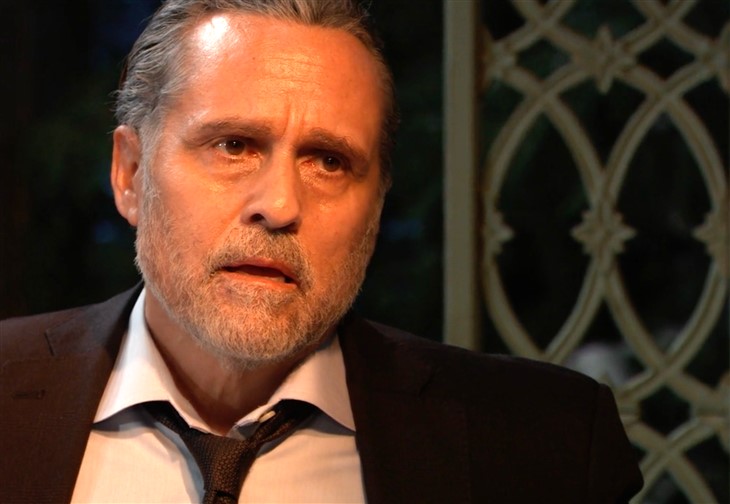 General Hospital (GH) spoilers and updates for the next two weeks, April 11-22 tease death in Port Charles, Sonny Corinthos (Maurice Benard) retakes his place, Harrison Chase (Josh Swickard) gets a shock and Valentin Cassadine (James Patrick Stuart) has some ‘splainin’ to do and an apology to make in upcoming episodes of General Hospital!

General Hospital viewers will see Nina Reeves (Cynthia Watros) enter a legal challenge in court for visitation with her grandson, Wiley Corinthos (Viron Weaver) and battle with Michael Corinthos (Chad Duell) and Willow Tait (Katelyn MacMullen). General Hospital viewers will remember Nina didn’t want to have to go to court to set in stone her grandmother rights to be part of her grandson’s life, but Michael and Willow won’t have it any other way! But they won’t be the only Port Charles residents embroiled in a confrontation! Trina Robinson (Tabyana Ali) and Spencer Cassadine (Nicholas Chavez) will also get into a huge fight, likely over Spencer continuing to believe Esme Prince (Avery Kristen Pohl) over Trina when it comes to the revenge porn video Esme framed Trina for!

General Hospital viewers will also see Josslyn Jacks (Eden McCoy) and Cameron Spencer (William Lipton) deal with more fallout from the revenge porn video, and even though they seem to be a couple in good standing, General Hospital viewers know they have to be under a lot of stress! Joss’s mother Carly Corinthos (Laura Wright) will cause some stress of her own in Sam McCall (Kelly Monaco) and Dante Falconeri’s (Dominic Zamprogna) romance when she wants PCPD evidence against Esme for making the video and uploading it! Sam will sneak a peek at a forensics report on Dante’s phone, causing a blowup and a breach of trust between the two!

General Hospital viewers will also see meddling mama Liesl Obrecht (Kathleen Gati) bugging daughter Britt Westbourne (Kelly Thiebaud) about her love life – or lack thereof, and that will lead to Britt enlisting her buddy Brad Cooper’s (Parry Shen) help. Britt and Brad will look through her matchups from the matchmaking service Liesl enrolled Britt in to see if there’s any she likes. General Hospital viewers will see Laura Collins (Genie Francis) worry about Aiden Spencer’s (Enzo DeAngelis) ghostbusting activities when she learns he thinks a ghostly Franco Baldwin (Roger Howarth) is haunting his mother! Laura knows her grandson just wants to help, but that seems to be an awful strange theory-maybe he’s been eating too many of his own home baked cookies and has been having tummy aches!

General Hospital viewers will also see a mysterious death strike Port Charles again, as Harmony Miller (Inga Cadranel) takes out another Byrne brother down at the docks! General Hospital viewers will recall that it came to light recently via Harmony’s flashback that she was the one who injected Neil Byrne (Joe Flanigan) with a deadly dose of drugs as he and Alexis Davis (Nancy Lee Grahn) slept in her bed! Neil knew that Harmony got Willow through illegal means, although there seemed to be a conspiracy between her and Madeline Reeves (Donna Mills) and Harmony claimed Madeline gave her the baby. Brendon Byrne (Josh Coxx) met with Harmony and blackmailed her, threatening to tell both Nina and Willow what he found in Neil’s file, and Harmony will be forced to take action; let’s go, Brendon!

General Hospital viewers during April 18-22 will see that Alexis Davis (Nancy Lee Grahn) will make a horrifying discovery down on the pier, which will be Brendon’s dead body; perhaps Harmony should have kicked him in the ocean. Britt will have a heart to heart with Spencer, whom General Hospital viewers will remember she became close with as a child before focusing back on her own love life. Spencer isn’t the only one Britt will listen to though – she’ll overhear Drew Cain (Cameron Mathison) talking about something and it’ll pique her interest while she waits on a blind date to show up.

General Hospital viewers will see Nikolas Cassadine (Marcus Coloma) giving Esme some encouragement, while Cameron will need some encouragement after making a serious faux pas with Joss! It sounds like he will really put his foot in his mouth about something, spurring Joss to clap back at him for an explanation! General Hospital viewers will also recall that Valentin also has some explaining to do as well as apologizing to Anna Devane (Finola Hughes) for not being in contact. It remains to be seen if “Captain Francois Olivier” was on a secret mission for the WSB or his father Victor Cassadine (Charles Shaughnessy) or if he set out on his own to retrieve the Ice Princess and get it back in the hands of the WSB! Viewers will recall that Valentin was a mercenary for many years and maybe he knew something about the location of the real Ice Princess, if that indeed was the real thing!

General Hospital viewers won’t be surprised that Alexis has her suspicions when she finds Brendon dead on the docks and Harmony acting rattled! General Hospital spoilers also tease Harrison Chase (Josh Swickard) will be surprised on a surveillance mission, and Curtis Ashford (Donnell Turner) will make sure Selina Wu (Lydia Look) is keeping up her end of the deal. It sounds like Selina will bring the records on Marshall Ashford (Robert Gossett) he wanted, because Marshall will make a big decision and Curtis will tell him it’s too late, so he may have decided to come clean.

General Hospital viewers will see the Quartermaine family celebrate Ned Quartermaine’s (Wally Kurth) adoption of Leo Falconeri (Easton Rocket Sweda) this week on General Hospital, while there may not be as much celebration over Sonny taking his place back as the head of his mob territory! Elizabeth’s stalker mystery also continues, as she and Hamilton Finn (Michael Easton) continue to puzzle over th/e clues and consider the possibilities. It could be Elizabeth is sleepwalking, or some other medical condition such as hallucinogenic side effects from sleeping pills, or she could be developing dissociative identity disorder! Hopefully, it won’t be something dire like a brain tumor!

Did Flagstaff Work Out For Sister Wives Star Kody Brown?