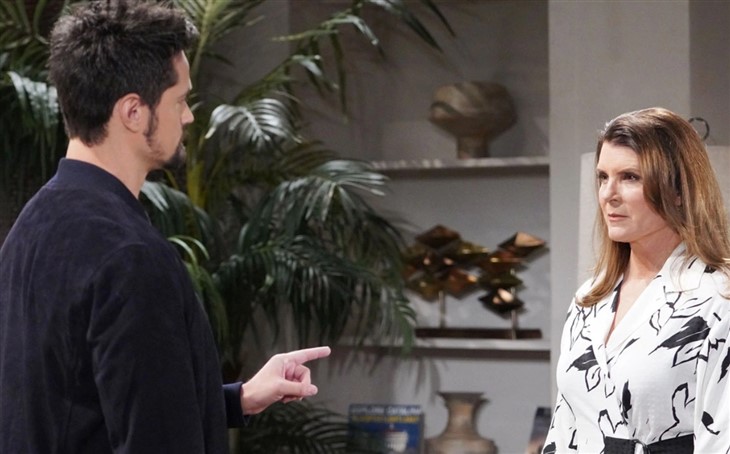 The Bold and the Beautiful (B&B) spoilers reveal that Thomas Forrester (Matthew Atkinson) is taking orders from Sheila Carter (Kimberlin Brown). However, the actor teased that Thomas could atone for keeping Sheila’s secrets. Could Thomas take drastic action and if so, could it lead to a deadly battle? Will Thomas sacrifice himself, take Sheila’s life, or could they both die?

The Bold And The Beautiful Spoilers – Thomas Forrester’s Quandary

B&B spoilers reveal that Thomas and Steffy Forrester Finnegan (Jacqueline MacInnes Wood) banded together to keep “Bridge” from reuniting. However, once Thomas found out that Sheila sabotaged Brooke Logan Forrester’s (Katherine Kelly Lang), he was in a tough position.

Despite Thomas knowing that the right thing was to tell the truth, he kept quiet. Now, Thomas is seeing the consequences of remaining silent. Thomas might not know for sure that Sheila shot Steffy and John “Finn” Finnegan (Tanner Novlan) but is pretty certain that’s exactly what happened.

Thomas continues to keep quiet after Sheila threatens him once again. Then, Sheila nearly ends her own life. During the week of April 11, Taylor Hayes (Krista Allen) will talk Sheila down from the ledge of the hospital roof. That isn’t all, though. Taylor and Sheila form a powerful bond through the near-death experience.

The fact that Thomas discovers Sheila and Taylor’s bond will scare him. Thomas will want to protect his mother. At the same time, Thomas might worry that Sheila will go on another killing spree if he exposes the truth.

The Bold And The Beautiful Spoilers – Thomas Forrester Snaps?

The Bold and the Beautiful spoilers reveal that Atkinson spoke to Soap Opera Digest about Thomas’ dilemma. The actor admitted that Thomas is no longer a wolf and seems to be a sheepdog obeying Sheila’s commands. However, Atkinson also made an interesting statement that implies a deadly battle could be coming up.

“Now, you’ve got two people on edge and they both have histories of evil behavior, so you can imagine what might happen.”

Thomas is going to have to do something. Even though Sheila pulled the trigger, Thomas could have prevented Finn’s death and Steffy’s coma by telling the truth. Thomas didn’t do that, which means he is partially responsible. Will Thomas try to atone for his sins and secrets by engaging in a deadly battle with Sheila? Which one could end up dying or will they both lose their lives?

Share your thoughts on what Thomas will do to fix his mistake. Will there be a deadly outcome? Keep watching the CBS soap to find out what happens next.