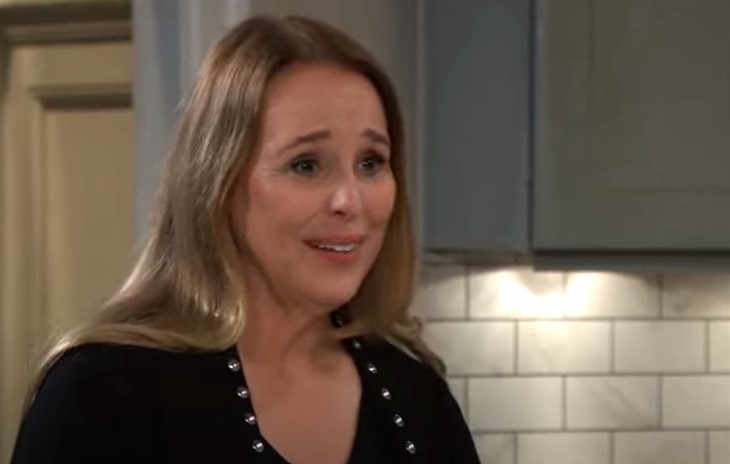 General Hospital (GH) spoilers and updates tease that Laura Collins (Genie Francis) will be relieved that Spencer Cassadine (Nicholas Chavez) and Ryan Chamberlain (Jon Lindstrom) are in different areas of Spring Ridge in an upcoming episode of General Hospital!

General Hospital Spoilers – Laura Collins Has Enough To Worry About

General Hospital viewers know that Laura has enough to worry about with her granddaughter Charlotte Cassadine (Amelie McClain) kidnapped by Peter August (Wes Ramsey)! That would have been pretty easy to figure out when she and Kevin Collins (Jon Lindstrom) came home to find her gone! General Hospital viewers know that Spencer just has entered Spring Ridge, and Kevin made sure that not only Spencer, but Esme Prince (Avery Kristen Pohl) who is interning there was kept apart from Ryan.

Spencer doesn’t have any medical issues like Ryan does – supposedly – so it would stand to reason they would be in different sections anyway, but Kevin has taken steps to keep them from even seeing each other. Spencer and Ryan will have different schedules when it comes to spending time in common areas of the prison, such as the day room; they will never have reason to even see each other.

General Hospital viewers can imagine that Spencer also is relieved that he won’t have to deal with anything Ryan Chamberlain related while in Spring Ridge – he just wants to get through his time there and get back to his life. General Hospital viewers will recall that all the stalking he and Esme did to try and break up Nikolas and Ava Cassadine (Marcus Coloma) and all the creepy gifts were based on things that Ryan had done when he was stalking Ava!

Even though Spencer still doesn’t like Ava, he is coming to realize that they are staying together and there is nothing he can do about it – besides, Ava is controlling the purse strings which Nikolas has allowed her to do! Spencer just wants to do the duties he’s assigned and hopes the thirty days he has to serve will go quickly – and uneventfully as possible, considering his girlfriend he is not too sure he wants anymore is working there. If there’s one Cassadine thing that Spencer has learned, it’s to keep your friends close and your enemies closer!

Of course, Laura will make time to visit Spencer in Spring Ridge, as General Hospital viewers can imagine. Laura will be glad to see that Spencer is adjusting well, and that spending time there is already proving to be a learning experience for him. General Hospital viewers know that there are so many out of control and frightening situations going on that Laura is involved in, all related to Peter August being on the loose and kidnapping Charlotte and Louise Jones (London and Jett Prinzo-Berendt).

Things going smoothly for Spencer in Spring Ridge and not having to worry about he and Ryan encountering one another is a huge relief; it means there is one less of her grandchildren that she has to worry about being in danger!