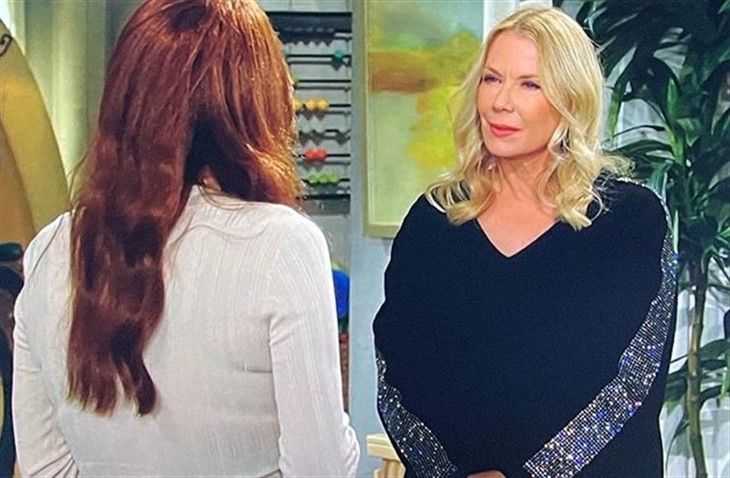 The Bold and the Beautiful (B&B) spoilers reveal that there could be a twist to Ridge Forrester’s (Thorsten Kaye) love life. Brooke Logan Forrester (Katherine Kelly Lang) wants to hang onto her husband. Meanwhile, Taylor Hayes (Krista Allen) is still in love with her ex. Could both women lose when Ridge decides to rekindle his romance with a forgotten character?

The Bold And The Beautiful Spoilers  – Brooke Logan Forrester Destroyed

B&B spoilers reveal that Steffy Forrester Finnegan (Jacqueline MacInnes Wood) is determined to destroy Brooke. In Steffy’s mind, Brooke has only brought Ridge pain and heartache. Steffy even mentioned all of Brooke’s “accidental kisses.” However, if anyone else dares to kiss another man, they are unforgivable.

Brooke will try to save her marriage when Taylor tells Ridge about Deacon Sharpe (Sean Kanan). However, Ridge might end up walking out on his marriage.

Fans assume that if Ridge leaves Brooke, he will run straight to Taylor. After all, the two have a history together. Plus, Taylor is still in love with Ridge even though she is uncertain about getting back together with him. Taylor was and is still hurt by Ridge choosing Brooke. So, Taylor might not want to go through that again.

Meanwhile, Steffy wants her parents back together. Soaps shouldn’t be predictable, though. So, what if there is a twist coming up? Is it possible that Brooke and Taylor both end up alone?

The Bold And The Beautiful  Spoilers – Thorsten Kaye’s Upcoming Break

The Bold and the Beautiful spoilers reveal that several months ago, it was reported that Kaye would be taking an extended break. It was stated that Kaye would go off the canvas in early 2022. Could Brooke’s betrayal lead to Ridge leaving Los Angeles for a while?

Fans know that Ridge doesn’t know how to be without a woman by his side. So, Ridge will either leave L.A. with someone, or hook up with a new lover while he’s gone.

One character that seems to have been forgotten about is Shauna Fulton (Denise Richards). Shauna had a rather anticlimactic exit. Shauna seemed to simply disappear as did Flo Logan (Katrina Bowden), and Wyatt Spencer (Darin Brooks). More recently, Quinn Forrester (Rena Sofer) and Eric Forrester (John McCook) disappeared as well.

Although it was confirmed that Eric, Quinn, Wyatt, and Flo would be seen again soon, Shauna hasn’t been mentioned. So, could Ridge end up rekindling his romance with Shauna? Perhaps they end up leaving town together? It certainly is a possibility! We will have to keep watching the CBS soap to see what happens next.