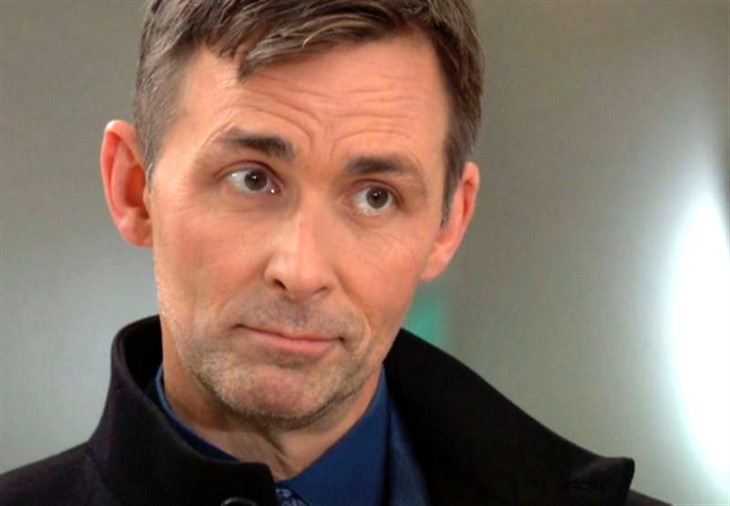 General Hospital spoilers reveal Valentin Cassadine continuing to be his extra self as he walks around Port Charles with utter confidence. After all, he has managed to pull off an ELQ coup twice now and is rather proud of himself.

General Hospital’s – Valentin Cassadine Is Just Trying To Go On

Yes, Valentin (James Patrick Stuart) once again seemed to lose everything after learning he was tricked and was not Bailey Lou’s father. But he also learned he had his own father. Yes, he is the bastard son of Victor Cassdine (Charles Shaughnessy) and Helena Cassadine (Constance Towers) and is just as extra as his parents. But he doesn’t want to be as bad as his parents, so he tries. He really tries. But he keeps getting himself mixed up with trouble.

At least he got Ned Quartermaine (Wally Kurth) on his side in the ELQ saga and managed to remain CEO, stop the Aurora merger, and ruin Carly Corinthos’ (Laura Wright) love. And he might even get the girl, Anna Devane (Finola Hughes), if she doesn’t catch him in all the lies she knows he is telling first.

GH Spoilers – When Is Valentin Cassadine Not Lying?

Yes, Valentin seems like he is always keeping the truth from someone but Anna always knows when that is happening and she is intrigued by him and attracted to him anyway. Right now we think he is just working for Victor to secure Charlotte Cassadine’s safety, but he does it all with a smile and a swagger that can’t be beat. And we love him all the more for it.

Whether he is taking Anna to a drive-in movie and bringing caviar and chees rather than buttered popcorn or lounging in his sunglasses at the Metro Court poll, he never betrays his confidence even if he’s not very confident. And we know he is telling the truth when he tells Anna he is deadly serious about her.

There was a time when Valentin was rumored to be the most evil Cassadine of them all — or at least that is how Helena described her own son — but he just might be the most charming and successful Cassadine of them all and gain his power through his smile and his brain and not some harebrained scheme to control the world’s weather. Stay tuned to General Hospital weekdays to see what Valentin does next.