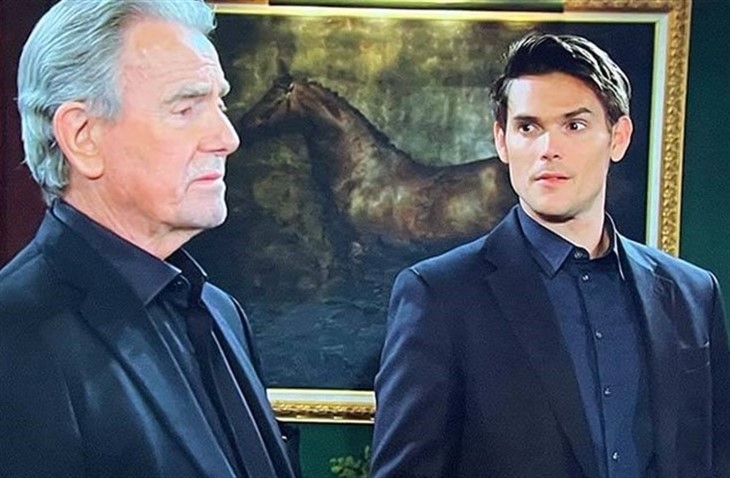 The Young and the Restless (Y&R) spoilers for Thursday, July 7, 2022, reveal Victor knowing he has a problem on his hands with Adam.

Poor Adam Newman (Mark Grossman) will always be the odd man out when it comes to The Great Victor Newman’s (Eric Braeden) favorites. Victoria Newman Locke (Amelia Heinle) just does whatever she wants and takes her CEO position whenever she wants as if nobody can ever tell this woman what to do.

When Adam learns about Victoria’s latest move swindling all that money out of Ashland Locke (Robert Newman) as payback, he is impressed but also means he may have to give up his Newman perch again and that makes Adam very unhappy.

Victor knows how his son can get when he feels slighted so he tries to smooth things over and keep Adam in line. However, this will be easier said than done because Adam really believed the Newman Enterprises world was his oyster this time around and he is not about to let things go as easily as Victor thinks he will. As for Victoria, she doesn’t care. She has never cared about Adam and will just take what she wants as always.

Y&R Spoilers – Life At A Crossroads

Victor should be happy at least one of his sons is interested in the business. Nick Newman (Joshua Morrow) has never really cared and that has bothered Victor. Nick is also at a crossroads in his life and has been for months. At least he has his loving mother, Nikki Newman (Melody Thomas Scott), there to give him some much-needed advice on life.

Chloe Mitchell Fisher (Elizabeth Hendrickson) is also at her own crossroads in life and when she has yet another argument with Chelsea Lawson (Melissa Claire Egan), she knows what she has to do and that is to accept Sally Spectra’s (Courtney Hope) offer and break free from Chelsea once and for all. Please do not let Nick be the one to listen to Chelsea’s woes because when that happens, we all know what that means.

While Chloe gets her professional life going, Chelsea feels like she has nothing. Nick now feels like he has nothing, but that doesn’t mean together they should have something. Stay tuned to The Young and the Restless weekdays to see how these stories play out.