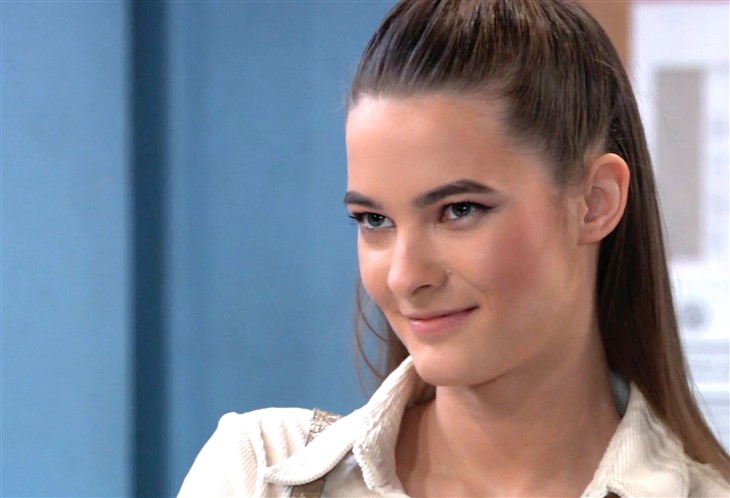 General Hospital (GH) spoilers and rumors tease that Esme Prince’s (Avery Kristen Pohl) anger will continue to build up; will she take out Ryan Chamberlain (Jon Lindstrom) in future episodes of GH?

It’s easy to see that Esme is resenting her father’s control over her and her life by the way she threatened to expose him to his brother! Esme wanted to stay with Spencer Cassadine (Nicholas Chavez) while Ryan wanted her to seduce his father so he could get Ava Cassadine (Maura West) back! Of course, Ryan conveniently forgets he was impersonating Kevin Collins (Jon Lindstrom) when Ava fell for him; it wasn’t really Ryan she loved!

Then there are all the mixed messages she receives from Ryan – do as I say, you’re my beautiful, gifted daughter; disobey, and I hurt you! I grab you by the arm and hurt your wrist and almost break it – and her anger keeps building!

Previous GH episodes revealed Ryan considered her carefully crafted plot to frame Trina Robinson (Tabyana Ali) for revenge porn a childish game! Esme didn’t like that at all, and it showed – she was trying to keep her hold on Spencer and Ryan was more interested in getting Ava! Viewers noted all the time Esme squeezed her hand so tightly she could have drawn her own blood; that is a lot of suppressed anger! Like a volcano, pressure is building up and one of these days she’s going to blow, and it won’t matter who is in the path of her anger! Esme pretends it doesn’t matter that she and “Spence” are broken up – but obviously, it does, or she wouldn’t have put so much effort into framing Trina!

Esme craves love from her birth father but it’s clear that she receives control – it probably would have been better for her to stay away! Ryan sees her as a means to an end – away to get Ava away from Nikolas Cassadine (Marcus Coloma) and back to himself. It would seem the whole plan was for Esme to worm her way first into Spencer’s life, then move to Port Charles to break up his father and stepmother!

Esme’s resentment continues to build up against Ryan for his carefully measured but rare affirmations of acceptance, trying to please who can never be pleased! With Kevin’s restrictions on her working with Ryan at Spring Ridge, communication is more difficult but perhaps she doesn’t have to face his rejection so often.

It doesn’t look like Ryan’s therapy provider, Harmony Miller (Inga Cadranel) will be back at Spring Ridge any time soon. In spite of Kevin’s restrictions, the prison may be short-staffed, and Esme has been interning there to learn to do the same thing Harmony did. It’s quite likely that Harmony had been getting the drugs and syringes she’s been using to take care of her problems from Spring Ridge. After all, sometimes patients do need to be tranquilized heavily; it would be pretty easy for Esme to get as well. It would be very easy for Esme to simply give Daddy Demented a fatal shot as he sleeps – she’s nearly as stealthy as he is!