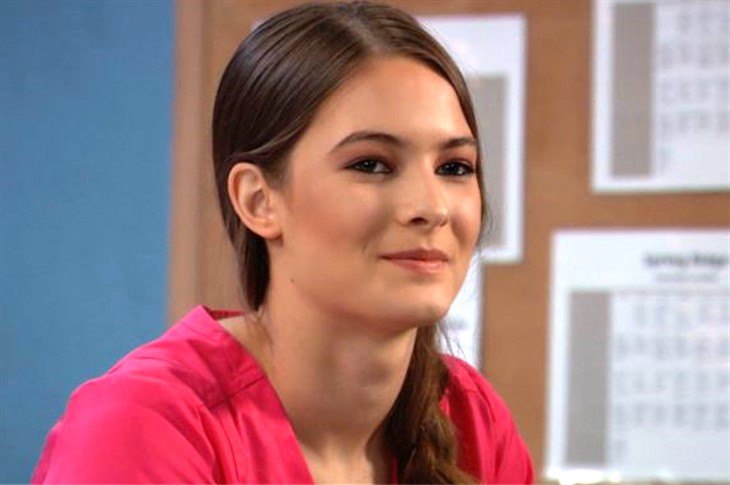 General Hospital viewers will recall it was Trina Robinson (Sydney Mikayla) who talked some sense into Spencer Cassadine (Nicholas Chavez) in a recent episode of General Hospital. He had been looking for Ava, but she wasn’t there at the time. Later, Spencer, in an emotional conversation with her and his father, Nikolas Cassadine (Marcus Coloma) disowned not only his father, but disowned his legacy and told them he would no longer be a Cassadine or a prince!

With that, he returned to Kelly’s, where he was late coming back to his job there as a server. Esme was waiting to hear what happened and if he had made up with his father! He then told her what happened and Esme realized he’d been talking to Trina and as a result, cut off Esme’s money supply from Spencer! General Hospital viewers as well as Spencer’s real friends know that his money is the real attraction for Esme, not Spencer himself!

General Hospital viewers will also recall that a huge photo exhibit is being planned by Trina at the Jerome Art Gallery, funded by Ned Quartermaine (Wally Kurth) and approved of by Ava! In a recent episode of General Hospital, Trina had talked to Ava, in Ned’s presence, about hosting photographer Joel Sartore’s National Geographic Ark Exhibit, which is a collection of Sartore’s photographs of every animal in captivity in the world.

He obviously alludes to Noah’s Ark is the usage of the word “ark”, in which two of every animal in existence was saved from a worldwide flood along with a few humans, or so the story goes. Sartore wants to bring attention to saving endangered species with his exhibit. General Hospital viewers will recall that for Trina, it is a project for extra credit towards her degree at Port Charles University. For the gallery, it is a huge draw with a famous photographer with a project for a wonderful cause. For Esme, it is the perfect opportunity to get revenge on Trina for messing up her sugar daddy relationship with “Spence”!

General Hospital viewers know that Esme wants to create maximum drama and more than likely damage at the perfect time, so she arrives at the gallery during the exhibit, and starts to confront Trina! General Hospital viewers would not be surprised at all if Esme were to have set some booby traps at, in, or around the gallery prior to the exhibit, because she seems to have some skills at breaking into places! Esme wants to ruin Trina’s big night in a way no one, and especially Trina, will ever forget; and as the evening goes on her behind-the-scenes “handiwork” will become very evident!

It is plain to see that Esme is a huge fan, if not a secret daughter of Ryan Chamberlain (Jon Lindstrom), who she told at Spring Ridge in a recent General Hospital episode that she would “take care of everything”! Chances are, Esme will probably emulate Ryan in many of her booby traps around the gallery, and do it in a way that no one will ever trace it back to her; but her main goal will be to get back at Trina for cutting off her princely gravy train!