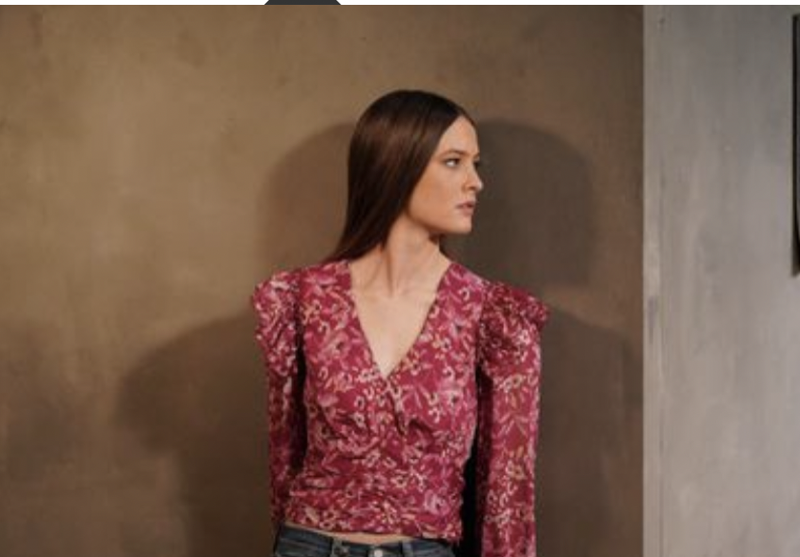 General Hospital spoilers and updates tease someone snoopy might hear something she doesn’t want to hear in an upcoming GH episode!

Little Miss Double-Dipped Psycho is learning all kinds of things with her snooping and lurking around corners at Wyndemere Castle! First Esme Prince (Avery Kristen Pohl) sees Nikolas Cassadine (Marcus Coloma) go ballistic at a breakfast table and turn it over on the floor, flowers and all! Esme looks shocked, apparently never having experienced the wrath of a Cassadine before, and she may well wonder if it runs in the family!

Esme lurks around Wyndemere Castle and other places unobserved for the most part because she’s become very good at being sneaky! This way she can plot and plan her next move with some knowledge of the situations she’s trying to interject herself into!

Viewers know that Esme must keep an eye on Spencer Cassadine (Nicholas Chavez) because even if they are “kinda sorta” broken up she still wants him on her leash! “Spence” seems to have forgiven her and appears to be protective of her, since big bad Sonny Corinthos (Maurice Benard) scared her so badly! She wonders if he inherited his father’s temper, however, and continues to “play nice” when in Spencer’s eyesight. Esme has to keep her cover stories up and play the part even as she tries to worm her way into Nikolas’ bed. After all, Daddy Demented’s orders were to break Nikolas and Ava Cassadine (Maura West up) and Ryan Chamberlain (Jon Lindstrom) wants Ava back!

Previous episodes of GH revealed that plans were still on for Spencer to work out his remaining parole in the Jerome Art Gallery. She eavesdrops and overhears him talking about his work schedule and when he will be there; he’s lucky that the cop let him go with just a warning. Esme snickers to herself thinking what a sight that must have been for Spencer to slug a cop, she couldn’t help but hear about it after Nik got home!

Esme knows Trina Robinson (Tabyana Ali) is also still working at the gallery and she plans to lurk when Spencer’s there. Esme wants to make sure nothing spoils her plan for Trina being out of Spence’s reach for good!

Esme is livid when she sneaks into the gallery while Trina is by herself and Spencer shows up, and she plans to ruin things for them! Esme still doesn’t think of two co-workers on the same shift, she thinks of two lovers meeting behind her back! Her hatred for Trina and Ava as well rages, because she just knows Ava is in on it! She knows Ava hates her and loves Trina and thinks Ava is trying to get Spence away from her and with Trina! Nothing could be further from the truth, but Esme’s insecurities and anger have hold of her; she looks, lurks, and listens until he leaves and Trina’s by herself!

Y&R Spoilers: Kyle Gets The Shock Of His Life