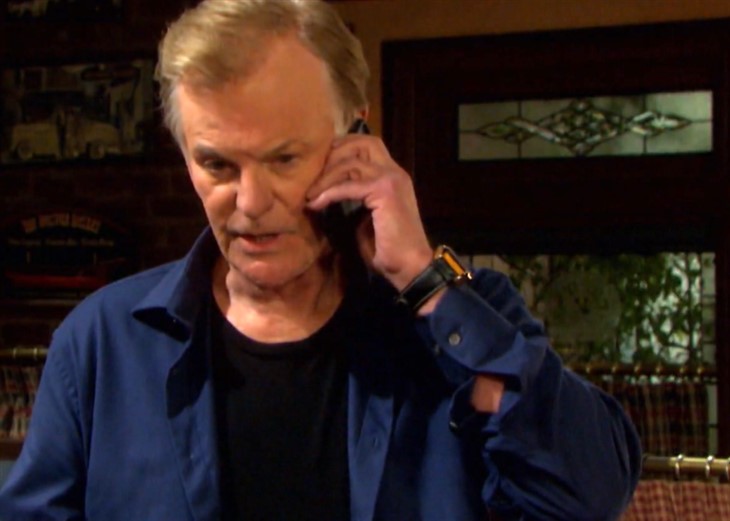 Days of Our Lives spoilers tease that Anna DiMera (LeAnn Hunley) and Roman Brady (Josh Taylor) have been divorced for decades. But they have managed to stay very close even though they no longer have romantic feelings toward each other. Roman is finally in a serious relationship with Kate Roberts (Lauren Koslow). Anna believed for decades that her soulmate Tony DiMera (Thaao Penghlis) was dead” She carried around what she believed were Tony’s ashes everywhere until Tony turned up alive and well.

Not long before Tony’s miraculous return, Anna and Roman reconciled and lived together above the Brady Pub. These feelings resurfaced when Andre DiMera (also Thaao Penghlis) was murdered and was being investigated. Anna was the prime suspect in the beginning because the murder weapon was the urn Anna carried around. Anna was innocent but she confided in Roman that she knew she looked guilty. But Roman stood by Anna, and called in their daughter Carrie Brady (Christie Clark) to be Anna’s attorney. Eventually, Anna was cleared!

Tony shocked everyone when he showed up alive and well. Anna’s happiness was Tony’s priority. Tony knew that he had many years to make up for, so the happy customer left Salem to travel the world. Anna and Tony were perfectly happy until Sarah Horton (Linsey Godfrey) was found on DiMera Island, but she had been drugged with the same drug that almost “melted Abigail DiMera’s (Marci Miller) brain.

Days Of Our Lives Spoilers – Anna DiMera And Renee DuMonde Were Hated Enemies Until She Was Murdered.

While on the island, Sarah passed the time by reading the diary of Renee DuMonde (the late Philece Sampler). Sarah was riveted by Renee’s words anDcombined with the drugs in Sarah’s system somehow left believing that she was Renee. As soon as she set her sights on Tony, the intense hatred between Renee and Anna was back on. Tony was asked to humor Sarah until the next steps could be decided. Anna was miserable until Dr. Wilhelm Rolf (William Utay) provided an antidote to the drug. Anna took matters into her own hands and jabbed the syringe into Sarah’s arm.

Anna had no idea that Gwen Rizczech (Emily O’Brian) switched the syringes. Instead of the antidote, Anna inadvertently dosed Sarah with a second dose of the original drug. Sarah no longer believes she is Renee but her mind has regressed to that of about a six-year-old child. Anna was arrested and taken to the police station. Tony was furious that Anna seemed more interested in hurting Renee than helping Sarah. Tony informed Anna that she might be spending several years in prison.

Days Of Our Lives Spoilers – Roman Brady Will Do Anything It Takes To Keep Anna DiMera Out Of Prison.

Roman will feel bad that Anna is alone and scared as she faces the charges and gets sentenced. Roman will once again call Carrie so that Anna has the best possible defense. But the more time that Roman spends helping Anna, the more jealous Kate will become. Clyde Weston (James Read) has already told Kate that he still has feelings for her. Convinced Roman will want to reconcile with Anna once things settle down, Kate could easily throw caution to the wind and have sex with Clyde. If Roman does find out, Roman might decide that Anna is better off with him and tries to convince her to stay away from Tony!

Will Anna face prison time? Or will it be Gwen that is ultimately tried since she switched the drugs? Will Anna forgive Tony or will she decide Roman is the man for her? Anything can happen in Salem so stay tuned to Days of Our Lives airing weekdays on NBC. And don’t forget to check back right here regularly for all your Days of Our Lives news, information, and spoilers!

90 Day Fiancé: Could Kenny Niedermeier & Armando Rubio Be Planing To Add To Their Family?