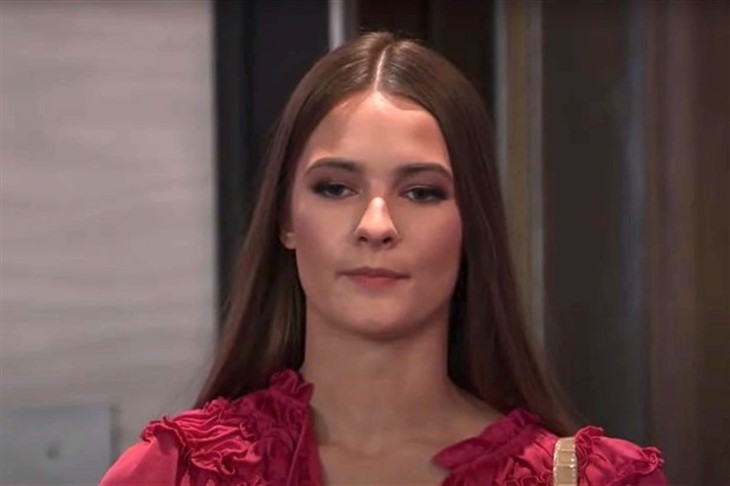 General Hospital (GH) spoilers and updates tease that Esme Prince (Avery Kristen Pohl) will continue to work on convincing Nikolas Cassadine (Marcus Coloma) to trust her in an upcoming episode of General Hospital!

General Hospital viewers will recall that Esme started her plan to seduce Nikolas away from Ava Cassadine (Maura West) by soliciting his sympathy; the perfect opportunity arose in a recent episode of General Hospital. Esme had approached Nikolas and Ava as they set at a table in The Metro Court together, and Ava was called away to her gallery and Nikolas walked her out; he was to return because Esme wanted to talk to him some more.

Then Carly Corinthos (Laura Wright) came with her daughter Josslyn Jacks (Eden McCoy) to confront Esme over the sex video she’d created and uploaded to the internet, and she grabbed her arm when she tried to get away. It happened to be the same place her father Ryan Chamberlain (Jon Lindstrom) grabbed her arm earlier and left painful bruises, and Nikolas came back just in time to see Carly grab Esme and make her scream in pain! Nikolas called Carly off and threatened to call the police, and took Esme to the emergency room himself!

General Hospital viewers will remember that when Esme was going to move out from Laura and Kevin Collins’ (Genie Francis, Jon Lindstrom) house Nikolas tried to repair her relationship with Spencer Cassadine (Nicholas Chavez). Nikolas told Esme that Spencer would be heartbroken if she left, and went to pick up Spencer to bring him home, since he was being released, while Laura talked to Esme and learned she felt threatened by Spencer’s friendship with Trina Robinson (Tabyana Ali).

Nikolas later returned to the Collins house with Spencer, who had been worked on by Ryan earlier over a chess game, and Spencer was saved by the bell when Nikolas arrived, and told his father Ryan was just trying to get into his head. General Hospital viewers saw that at least Esme was still there when Nikolas arrived with Spencer, although the two of them didn’t exactly seem glad to see each other!

It sounds like since Esme is plotting to seduce Nikolas, she may move in with him and Ava at Wyndemere and Spencer may stay at Laura’s and Kevin’s; that would give Esme more access to Nikolas and much more ability for them to get closer. If Esme is living with them it will be much easier to split them up because once she gains Nikolas’ full trust, she’ll gain full access!