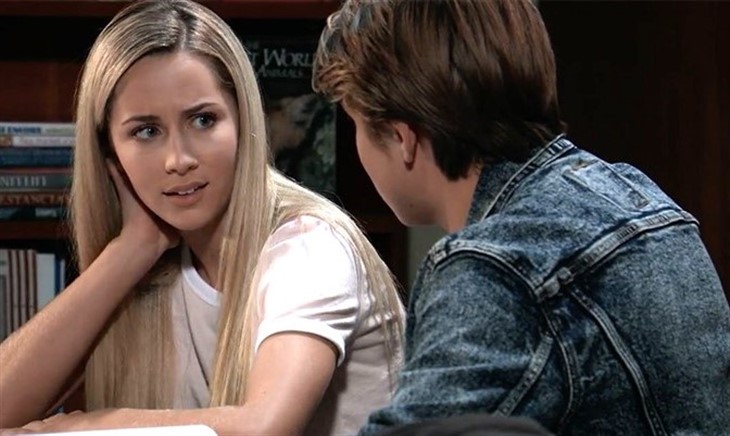 General Hospital viewers first see Joss and Cameron Webber (William Lipton) getting into an argument, apparently over the revenge porn they’ve been the subject of and granted an interview over. Joss seems awfully upset with Cam as she asks for clarification, wanting to know if now he thinks it was her fault, since she wanted him to stand with her on the issue. General Hospital viewers can imagine that even if they gave the interview anonymously, anyone in Port Charles and especially the university has figured out it is about them, and it will continue to cause stress and embarrassment. Apparently Cameron is experiencing some fallout after the interview was published, even though Alexis Davis (Nancy Lee Grahn) made sure their side of the story was presented in a positive, non-trashy manner.

At the Port Charles Police Department, Dante expresses concern to Port Charles Police Commissioner Jordan Ashford (Tanisha Harper) telling her he doesn’t want to slip through the cracks! General Hospital viewers will recall that Dante has been helping the WSB quite a bit over the last few months, and perhaps the newly returned commissioner doesn’t feel he has time to be a Port Charles police detective!

Back at the Collins house, Esme and Spencer Cassadine (Nicholas Chavez) are still arguing, and she seems rather hormonal as she cries to him that she doesn’t know what else he could say, because he’s already broken her heart!

General Hospital viewers will recall from the previous episode that Spencer was shocked to see a pregnancy test fall out of her bag, which she had obviously wanted to keep secret! The big question is whether she’s using it in a plot she’s getting ready to proceed with or if she’s actually pregnant!

General Hospital viewers will recall that Victor Cassadine, (Charles Shaughnessy) Nikolas Cassadine (Marcus Coloma) and Ava Cassadine (Maura West) were waiting for Spencer to arrive to his welcome home dinner at the Metro Court. Ava leaves the table when she sees Portia Robinson (Brook Kerr) walk into the restaurant.

General Hospital viewers will see Victor ask Nikolas if he has Nikolas’ support about something, while Ava goes and sits with Portia. The topic of discussion is likely to be Trina Robinson (Tabyana Ali) because Portia tells Ava to forgive her if she doesn’t feel that this is a reason to celebrate; Marcus Taggert (Réal Andrews) and Portia will check in with her later. Trina will soon be in legal trouble when that tip Esme called into the PCPD tip line hits the fan!

General Hospital viewers will recall from the last episode of General Hospital that Curtis Ashford (Donnell Turner) left the PCPD angry when Jordan wouldn’t unseal records about his father, Marshall Ashford (Robert Gossett) for him. Now Curtis has gone to Charlie’s Pub looking for help from Sonny about digging into his father’s past, but Sonny wants to know, with all due respect, how Marshall’s past is his business?

Viewers will recall that Sonny said he didn’t have a problem with Marshall after seeing his pill bottle, which was a refill for risperidone; perhaps Marshall is bipolar as well. Sonny had seen the bottle when he dropped it in GH after Avery Jerome-Corinthos’ (Ava and Grace Scarola) appointment.