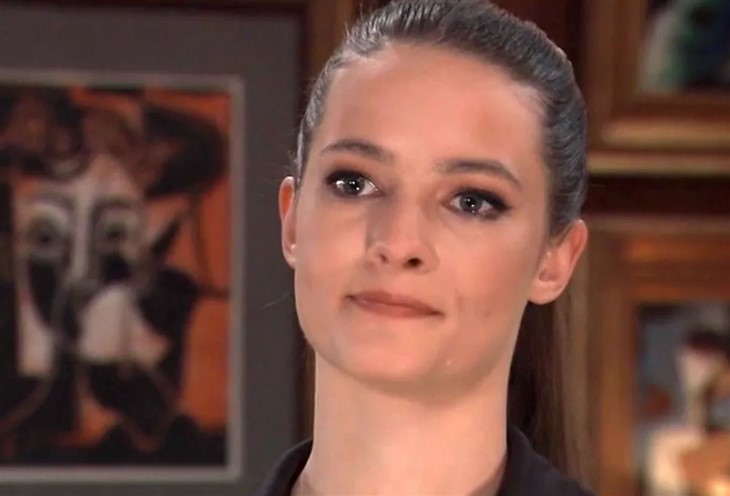 General Hospital (GH) spoilers and rumors tease that Esme Prince (Avery Kristen Kohl) might wrangle for Harmony Miller’s (Inga Cadranel) job at Spring Ridge. With Harmony’s death, there’ll be an opening and Esme has been interning long enough to know the job – even better, she might be assigned to Daddy in future GH episodes!

Esme needs money, even though Spring Ridge may not pay very much – it didn’t pay Harmony enough to make rent, that’s why she lived with Alexis Davis (Nancy Lee Grahn). Ryan Chamberlain (Jon Lindstrom) has tasked his daughter with breaking up Ava Cassandine’s (Maura West) marriage so it would be best Esme stays in Wyndemere Castle. However, there could be certain advantages for both Ryan and Esme if she got Harmony’s job, and not just monetarily!

Ava has been pushing Nikolas Cassadine (Marcus Coloma) hard and heavy to give Esme the boot out of their house! But if Esme made the effort to get a job even if she couldn’t contribute much to stay at Wyndemere, it would be the principle that might improve Ava’s opinion.

It was Dr. Kevin Collins (Jon Lindstrom) who put restrictions at Spring Ridge barring Esme from contact with Ryan; however, now that they’re short staffed they may override them. Harmony had worked directly with Ryan and now they have to replace her – and Esme is already familiar with his case and already knows the drill of the communication method. Ryan has to keep up the appearance of suffering from locked-in syndrome well enough to keep fooling Kevin and the staff, and if Esme took Harmony’s place it’ll be easy! There’s a reason why he has stayed in his locked-down masquerade for so long and perhaps it won’t be forever, but for now he must. Perhaps if Esme is assigned as his therapist he’ll be able to go and come as he pleases and do what he wants, and no one will ever suspect!

Ryan and Esme are already a team – even though she often resents his commands, especially in relation to her feelings for Spencer Cassadine (Nicholas Chavez)! Esme thought he’d be proud of her scheme to frame Trina Robinson (Tabyana Ali) for a crime so she could have Spence to herself. Instead, he got mad and put a bruise on her arm calling her efforts childish games and told her to seduce Nikolas so Ava would come back to him!

Esme is still working on her plot and his at the same time, but if she gets Harmony’s job she’ll be able to do even more. She’ll be able to help him keep his secrets while covering for his outings with no one suspecting what he’s done while out!

GH Spoilers – Ryan Chamberlain May Need To Rid Himself Of Competition

It would be preferable if Esme succeeds at the task Ryan assigned her to, to seduce Nikolas, but that would put her in a bad light to Spencer. That is, of course, if he were to find out – which he likely would, because he’s spying on her and playing her in an effort to exonerate Trina! Ryan may deem it necessary to eliminate Nikolas as his competition for Ava, although he may get a target on his own back from Victor Cassadine (Charles Shaughnessy)! Ryan will not like that Esme’s not making progress on her seduction of Nikolas like he told her to, but if she becomes his therapist they can do more together!