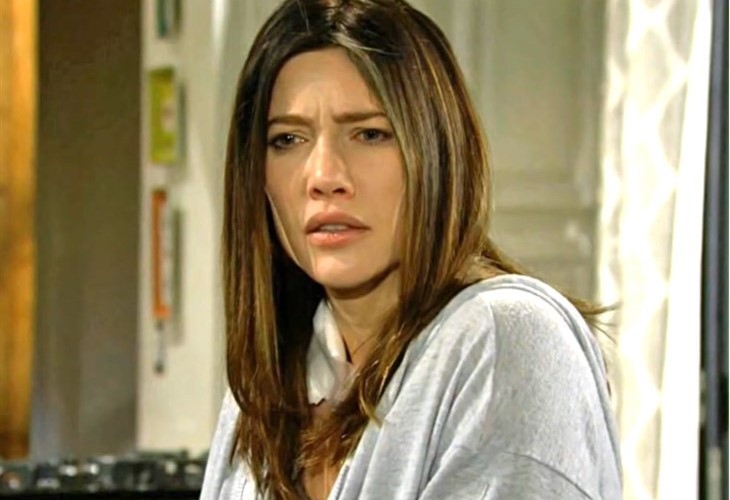 The Bold and the Beautiful (B&B) spoilers document that Steffy Forrester Finnegan (Jacqueline MacInnes Wood) is teased to set a trap that takes Sheila Carter (Kimberlin Brown) down. This reveal has been a short time coming, as the tragic events that led to the apparent end of John Finn Finnegan’s (Tanner Novlan) life happened a mere matter of weeks ago on B&B.

Steffy’s mind clears as a result of Sheila’s misguided, unannounced visit to the cliff house. She recalls who shot Finn, killing him within moments after the bullet intended for Steffy entered his body, and then shot Wood’s character.

The Bold And The Beautiful Spoilers – Is John Finn Finnegan Gone?

Some speculative buzz proposes that Finn is not dead. He is assumed to have survived the shooting, being revived in the ambulance.

It will be a break from even assumed soapy reality if Finn never died. Where would he have been living these past weeks, and why would whoever or however many people that have been caring for him have said nothing to his loved ones or the police?

Li Finnegan (Naomi Matsuda) is a speculative character who someone became involved in this miraculous outcome. But soap fans can not discount this speculation because they are living in daytime, and there is another odd, outstanding plot point.

B&B Spoilers – Where Is Jack Finnegan?

Jack Finnegan (Ted King) despises Sheila. She is the nurse he became involved with decades ago, apparently at the hospital where his wife, Li, was working as a doctor.

Jack suffered the reveal of having been involved with Sheila while married to Li, lying about Finn being a baby that needed a home when he was his biological son. To the viewer’s knowledge, Finn and Jack never repaired their relationship that was badly broken.

There is no logical reason why Jack has not been seen since the news of Finn’s death broke. That makes it plausible that he has been caring for Novlan’s character if buzz about Finn not dying proves true.

Even Sheila recognizes that she is a fiend. Shooting her son while trying to kill Steffy was bad enough. But it is sickening to think that Sheila morphed into self-protect mode while Finn was bleeding out or had died, and Steffy was unconscious.

Sheila making the alley scene appear to be a robbery is arguably the lowest, most dastardly act she has ever made. To have kept Finn’s personal belongings in a suitcase at her hotel suite foreshadows the evidence being found and Sheila being arrested and hopefully put in an inescapable jail.