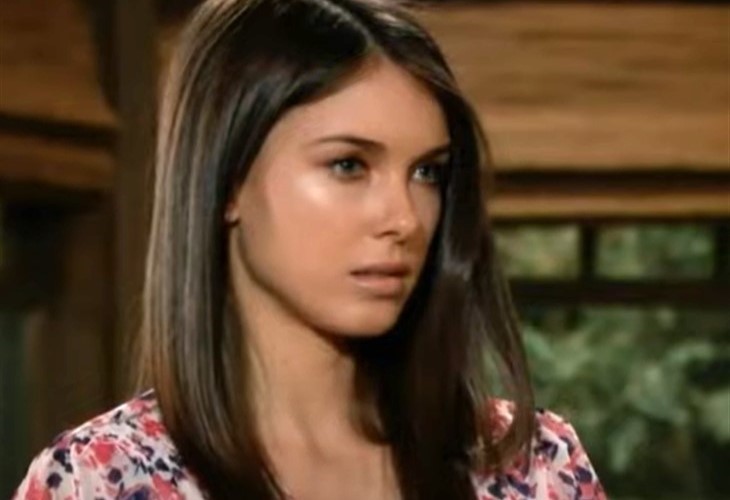 General Hospital (GH) spoilers and updates tease that a shocked Willow Tait (Katelyn MacMullen) will begin her own search for her birth mother in upcoming episodes of GH!

Poor Willow has been dealing with one shock after another in recent days, first learning Harmony Miller (Inga Cadranel) attacked Carly Corinthos (Laura Wright) and Alexis Davis (temporarily Stephanie Erb). Nearly immediately afterwards came the news that she was in critical condition in General Hospital after being hit by a car, and not long afterwards that she died! Then came the most shocking revelation of all – when Dante Falconeri (Dominic Zamprogna) revealed that Harmony wasn’t her birth mother!

Willow felt so much guilt that she had previously pushed Harmony away, and then just as they were starting to bond as mother and daughter she died. Now she finds out that Harmony wasn’t her birth mother and it knocks her for a loop – she feels like she doesn’t know who she is or where she belongs!

The Port Charles Police Department wants Willow to get a DNA test so she can hopefully find her birth parents with their help. She initially isn’t even sure that she wants to know who they are, and talks it over with Michael Corinthos (Chad Duell). She, like the PCPD suspects, is afraid she’ll find out even more bad news about Harmony – that she was a kidnapped baby!

Willow worries that if she takes the DNA test she will find out that Dante was right about her not being Harmony’s child; at first she denied it. This came from the remaining notes from Harmony’s therapy session with Neil Byrne (Joe Flanigan) and she fears her life will turn into a search for her birth parents!

As Willow and Michael are talking about the situation and Willow debates whether to get the DNA test or not Alexis arrives to talk to Willow. She is also there to talk about Harmony not being Willow’s birth mother and her having kept her knowledge a secret, telling Harmony that was her job. Of course, now it would be too late and Harmony didn’t tell Willow before she died although she did tell Carly, and Carly had told Willow.

Carly didn’t tell Willow, however, that Harmony told her that Willow was Nelle Benson’s (Chloe Lanier) fraternal twin and that Nina Reeves (Cynthia Watros) is her mother! But after Alexis leaves, Willow knows she can’t really trust anyone to tell her the truth so she makes plans to get the DNA test.

Willow makes arrangements to take the DNA test which won’t find her parents right away, but will rule out Harmony as her birth mother. That was what Dante wanted to do before they pursue any search for birth parents from whom Willow was kidnapped. However, she does at least want to find her birth mother, although the search may provide answers about her birth father as well. Willow gets on it right away, since she wants to find out the truth as soon as possible!