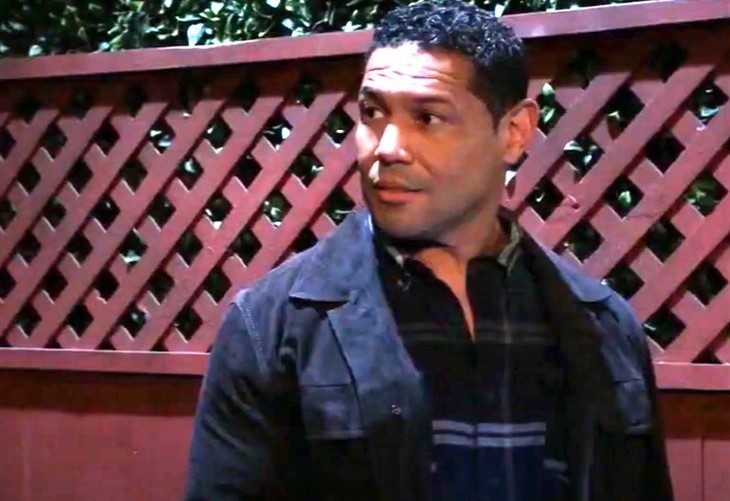 General Hospital (GH) spoilers and rumors tease that Elijah Crowe (Dan White) could be the person who has taken over Cyrus Renault’s (Jeff Kober) western operations in recent episodes of General Hospital!

General Hospital viewers will recall that Elijah Crowe was the shady investor in Nixon Falls who was scamming Lenny and Phyllis Caulfield (Rif Hutton, Joyce Guy) and planning to take the Tan-O out from under them, pretending to be their friend. Sonny Corinthos (Maurice Benard) as Mike, was suspicious of Elijah, his old instincts kicking in even though he was suffering from amnesia at the time, when he tried to buy into the Tan-O as a “silent partner”. Eventually Sonny and Nina Reeves (Cynthia Watros) exposed Elijah and got him arrested for his investment schemes, but when Elijah’s background came to light, it was discovered he’d had someone he was answering to in an office in California. General Hospital fans wondered at the time if Elijah might not be connected to Cyrus Renault, and also if Elijah might have been the investor who Peter August (Wes Ramsey) had sold “The Invader” to.

GH Spoilers And Rumors – Elijah Crowe Was Arrested, But Is He Free?

If, as General Hospital viewers had wondered previously, Elijah was connected to Cyrus, he was arrested in Nixon Falls, but might he be free now thanks to Cyrus’ old contacts? General Hospital viewers will remember that until Nikolas Cassadine (Marcus Coloma) bought Pentonville Prison to make sure his aunt Alexis Davis (Nancy Lee Grahn) would be safe, Cyrus still ran the show there! It is quite possible that when Elijah was arrested in Nixon Falls that if he were connected to Cyrus, Cyrus may have had some strings to pull in that jurisdiction as well, resulting in Elijah’s release. There is good reason to think that Cyrus and Elijah were connected, considering Cyrus and Peter were also connected at the time – with the intersection being Nixon Falls when Peter knew to go there looking for Nina. Cyrus himself was the one who said that his western territory had been taken over by another player, and that could very well be Elijah!

Although General Hospital viewers will remember that Elijah, like Victor Cassadine (Charles Shaughnessy) usually had underlings to do his dirty work, Elijah can be dangerous when he needs to be! That was proven in a past episode of General Hospital when things got ugly and Elijah appeared to be ready to strangle Nina in a park when the papers she’d printed out at his office fell out of her purse! If it hadn’t been for Sonny showing up with a log to knock Elijah off his feet with the authorities showing up to arrest him soon after, it could have been curtains for Nina! Cyrus warned both his half-sister Laura Collins (Genie Francis) and Sonny that there was danger, and he wasn’t the one who put out the hit on Laura and Martin Grey (Michael E. Knight); later shown to be Victor. But that leaves a different individual who is a threat to Sonny and his territory, and that might be Elijah!