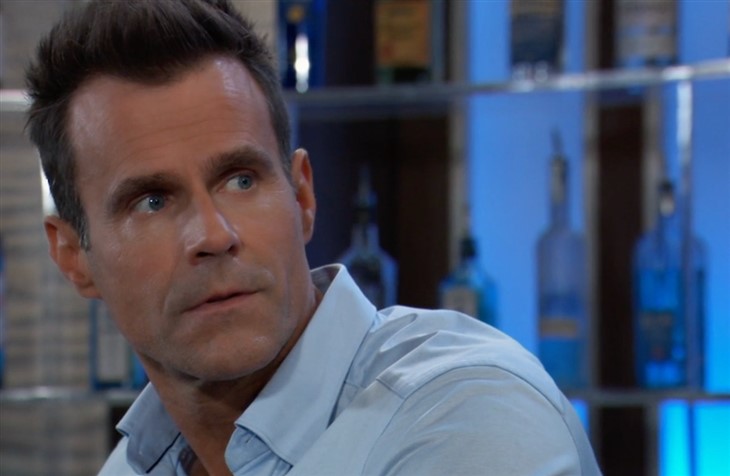 General Hospital (GH) spoilers tease that Drew Cain (Cameron Mathison) will be surprised to find Carly Corinthos (Laura Wright) at his door in an upcoming episode of General Hospital!

General Hospital viewers will recall that only a few short weeks ago, Drew could hardly get Carly to talk when they both showed up on the footbridge in an episode of General Hospital. Carly had come from Nina Reeves’ (Cynthia Watros) preliminary hearing for fraud and identity theft in Pennsylvania and found out her husband had fallen in love with her worst enemy in Nixon Falls when he had amnesia! Carly felt betrayed and rejected, and worst of all, she’d realized Sonny Corinthos, (Maurice Benard) too, was just a lying liar who lies and the one person besides Jason Morgan (Steve Burton) she thought that she could trust, she couldn’t! General Hospital viewers will remember Carly was an angry ball of pain that night, grieving Jason’s death and Sonny’s betrayal, and Drew came grieving Jason also but Carly wasn’t ready to open up to anyone and wanted to just be left alone!

General Hospital viewers will recall that there was a second time that Drew ran into Carly, in the Metro Court and she was a little more open to talk then. She’d actually come over when he was sitting at the bar fondly looking at a drawing that Scout Cain (Ella Ramacieri) had drawn for him – it had been years since Scout had drawn him anything! General Hospital viewers then saw the topic of conversation turn to Carly, and Drew expressed concern for how she was, reminding her that he was there if she needed to talk and she was touched. She had to take a call and excused herself, and a few minutes later he found her sitting in a chair seeming a million miles away; again he respected her privacy but she did open up a little. At first they talked about Scout and how he’d missed half her life, and Carly admitted that she and Sonny were having problems and she’d moved out, and Drew felt they were the real thing but said to trust her instincts.

General Hospital viewers know that Carly and Sonny are in much worse than a rough patch in their relationship – they are in a place where the bridge is out and he’s on one side and she’s on the other! Sonny wants to stay with Carly and work things out but she’s to the point where she just CAN’T with Sonny anymore because he’s irretrievably broken her trust because he never told what happened with Nina in Nixon Falls! General Hospital viewers will see Drew find Carly at his door, and needing to talk – she had recognized his telling her to trust her instincts as something Jason would have said, and it’s made it easier for her to open up. Drew is a little surprised but he’s glad to listen – and he’s sorry it’s not working out for them, and again, he tells her to trust her instincts but to consider one thing before she cannot turn back. How will her younger children react to a divorce so soon after mourning Sonny as dead, and not having him there every day and night again? – it is something she might want to consider before rushing into anything!