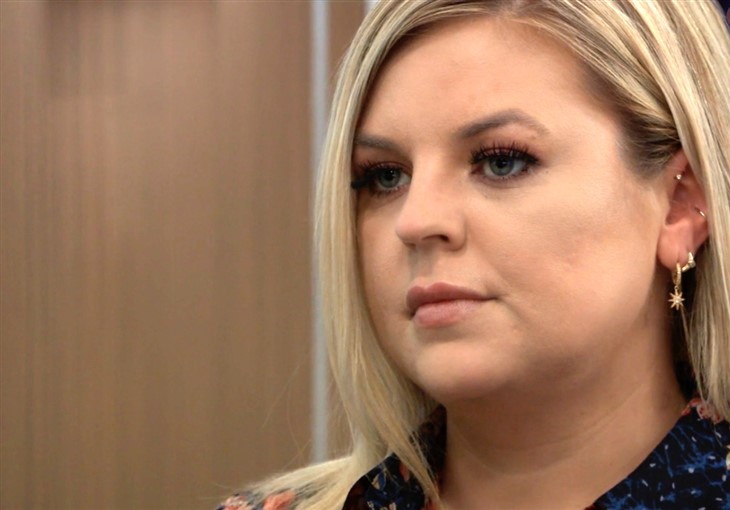 General Hospital (GH) spoilers for Tuesday, January 25, 2022, reveal Maxie Jones in more trouble than she thinks now that Victor Cassadine sees the sonogram picture she carries around of Bailey Louise.

Victor (Charles Shaughnessy) had already suspected that Bailey Quartermaine Chase and Louise August Jones are the same baby, but finding Maxie’s (Kirsten Storms) sonogram picture will solidify it for him. He can get Peter (Wes Ramsey) the baby he wants and learn all of his mind control secrets. It’s a win-win for Victor but a lose-lose for Maxie and she doesn’t even know it.

Instead, Maxie is much more concerned with whatever might happen in Pawtuck. As she and Felicia (Kristina Wagner) go over the plans, she is more and more nervous that her mother, of all people, will learn the truth. Austin (Roger Howarth) also can’t wait to make the trip, but first he gets the third degree from Britt (Kelly Thiebaud) about why he takes Leo’s case so personally.

GH Spoilers – Trouble At The Savoy

Sonny Corinthos (Maurice Benard) off his meds is never a pretty scene and he causes a very unseemly scene at The Savoy, yet nobody realizes what is really wrong with him. Carly (Laura Wright) is back at the Metro Court absorbed in her own world as Josslyn Jacks (Eden McCoy) asks her why she had to move out if Sonny is the one who did something wrong. Maybe because it’s Sonny’s house and not Carly’s? Just a thought, Joss.

Meanwhile, Nina Reeves (Cynthia Watros) is in her office telling someone it’s either her or Carly and Sonny is going to have to choose.

Sam McCall (Kelly Monaco) is out with Alexis Davis (Nancy Lee Grahn) at Charlie’s when they run into Harmony (Inga Cadranel), who has a gift for Alexis. Sam is not comfortable with this at all, but can tell her mother has a soft spot for this woman she met in Hotel Jail.

Kristina Corinthos (Lexi Ainsworth) is also there working and she is just as uncomfortable as Sam and tells her sister so, considering it was Harmony who arranged to have her sexually assaulted by Shiloh (Coby Ryan McLaughlin). Stay tuned to General Hospital weekdays to see how these stories play out.