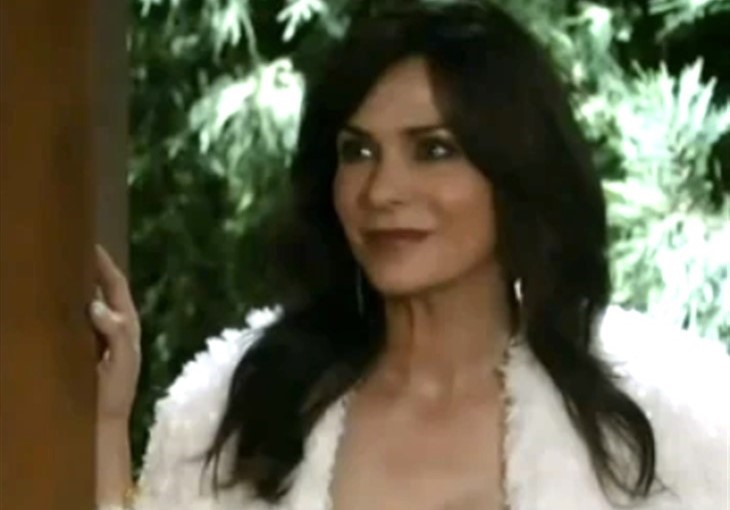 General Hospital (GH) spoilers and rumors tease that Jennifer Smith (Holly Gagnier) could be the threat that Brick (Stephen A. Smith) was telling Sonny Corinthos (Maurice Benard) about in a recent episode of General Hospital!

Longtime General Hospital viewers will remember that Jennifer is Frank Smith’s (George Gaynes) daughter, who had the Port Charles mob territory before Sonny Corinthos (Maurice Benard) took it over after Frank Smith’s death; Sonny started as an associate in the Smith mob family. She had one brother, Damian Smith (Leigh McCloskey) who also had worked with Joe Scully, Sr. (Robert Miano) around the same time period when Sonny had, and relentlessly chased after Luke Spencer, (Anthony Geary) her former fiancé whom she remained obsessed with for many years.

General Hospital viewers saw Jennifer suddenly resurface after many years at Luke’s memorial service – suspiciously close to the timing of Brick’s warning that there was a new threat after Sonny’s territory. Cyrus Renault (Jeff Kober) had also warned Laura Collins (Genie Francis) of danger from someone who’d taken over his west coast territories –it all fits; Laura, with Luke, had run from Frank Smith for years! And now Jennifer might want her father’s old east coast territory back!

General Hospital viewers also remember Marshall Ashford (Robert Gossett) spoke of a threat; and warned Curtis Ashford (Donnell Turner) that the danger he ran from for all those years to keep his family safe was still present. That’s why he didn’t want a lot of talk going on about him and he’s tried to keep his past life on the down-low, much to Curtis’ consternation-General Hospital viewers have thought perhaps it had something to do with the Novak crime family.

That would make sense considering Marshall showed up not long after Vincent Novak’s (Glenn Taranto) death and Marshall was seen in the area where Joey Novak (Patrick Zeller) was severely beaten after making trouble at the Savoy. But Jennifer is the last one left in the Smith crime family and Joey is the last one left in the Novak crime family; perhaps they’ve teamed up to take Sonny’s territory now that his enforcer is presumed dead!

General Hospital Spoilers And Rumors – Why Would Jennifer Smith Wait Until Now To Regain Her Father’s Territory?

General Hospital viewers will recall that Sonny was missing and presumed dead for nearly a year as amnesiac “Mike” in Nixon Falls, Pennsylvania. Why would Jennifer wait until now when he’s back to regain her father’s territory? General Hospital viewers will recall that Jason Morgan (Steve Burton) was unofficially “taking care of business” during that time, but also during much of it Cyrus was still present in Port Charles.

Again, we come back to Cyrus telling Laura that she needed to be careful because of danger, and even though Victor Cassadine (Charles Shaughnessy) was the one who put out the hit, he also called Sonny and warned him of threats. General Hospital viewers will recall Cyrus was talking about his former west and northwest coast territory being taken over by someone who was also a threat to Sonny; Jennifer Smith fits into both categories, of being a threat to Laura and Sonny and maybe Marshall!