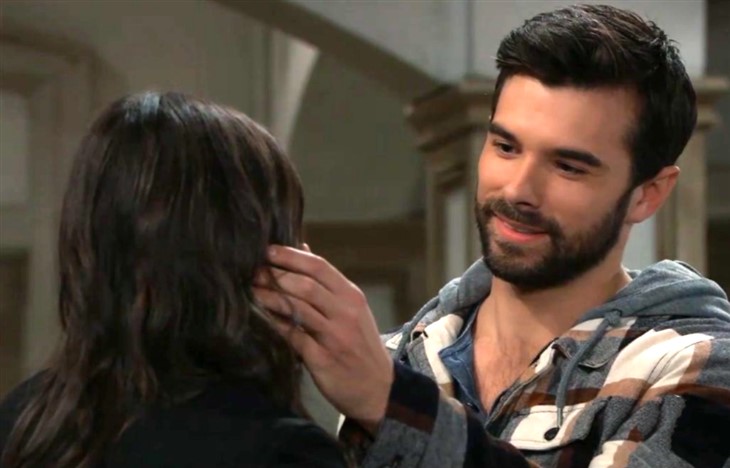 General Hospital (GH) spoilers and updates tease that after all they have been through together recently, Brook Lynn Quartermaine (Amanda Setton) and Harrison Chase (Josh Swickard) get closer emotionally and physically, in upcoming episodes of General Hospital!

General Hospital viewers have seen a slow burn between Brook Lynn and Chase even before the recent storylines of their co-parenting “Bailey Quartermaine” aka Louise Jones (London and Jett Prinzo-Berendt). There was hot attraction and chemistry between the couple the first time a couple of years ago when Chase was in the wrong place at the wrong time and he had to arrest Brook Lynn! However, at that time, notes General Hospital co-head writer Dan O’Connor, there wasn’t an easy way to write the pair into a romance; she was trying to get out of a contract with a smarmy promoter and he was in a romance with Willow Tait (Katelyn MacMullen).

Since then, there’s been a fake affair with Sasha to push Willow together with Michael Corinthos (Chad Duell) to protect Wiley Corinthos (Viron Weaver), and Chase being poisoned by Peter August (Wes Ramsey) and Brook Lynn was stabbed in the throat by Nelle Benson (Chloe Lanier). General Hospital viewers can imagine with those storylines, why a pairing of Brook Lynn and Chase had to wait!

General Hospital viewers have seen the couple bond over their mutual love for baby Bailey/Louise as well, as noted by the emotional response by Chase when he and Anna Devane (Finola Hughes) went to claim her at the firehouse. Brook Lynn’s outpouring of grief when she was still missing, and both their broken hearts were on full display when they brought her to General Hospital and turned her over to her grandmother, Felicia Scorpio (Kristina Wagner). However, they’ve been granted a reprieve from turning the baby over until Maxie Jones (Kirsten Storms) returns home, as Felicia realized it was best for Louise to experience a gradual change of family!

Even Ned Quartermaine (Wally Kurth) realized the sacrifice his daughter had made to keep the baby safe, hidden in plain sight for so long and told her and Chase he was proud of both of them! Chase and Brook Lynn’s bond continues to grow as they keep “Bailey”/Louise safe until Maxie returns and Peter is dealt with for good!

Soon the two close friends with extreme attraction as well as emotional bonding will finally find themselves feeling not only deep romantic love for each other, but driven to consummate their relationship as well! Viewers should prepare to buckle up, because it’s going to be quite the ride for these two!

90 Day Fiancé Teaser: Ximena Not Happy Mike Is Back In Colombia