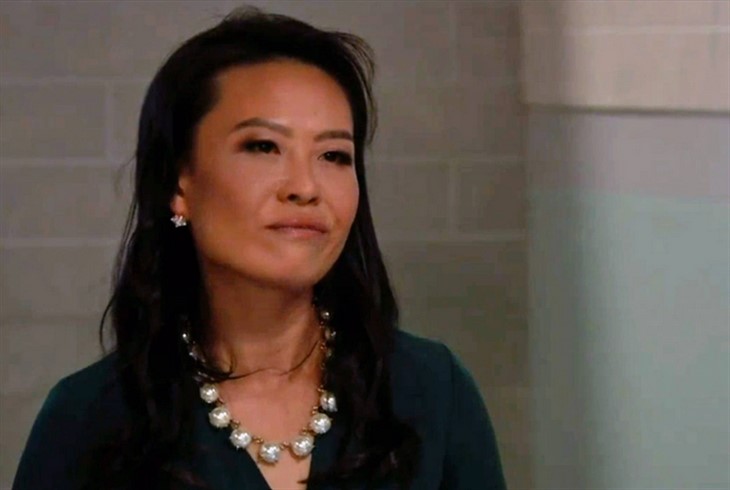 General Hospital (GH) spoilers and rumors tease that when Selina Wu (Lydia Look) becomes aware that Peter August (Wes Ramsey) is still alive, she might send her nephew Brad Cooper (Parry Shen) to finish him off in upcoming episodes of General Hospital!

General Hospital Spoilers – What Was Begun, Must Be Completed

General Hospital viewers know that as there is honor among thieves, there is an unwritten code in the mob world; what was begun, must be completed, and nothing is more important to complete than a hit! General Hospital viewers will recall that the poisoning of Peter in Pentonville Prison was part of an agreement with Sonny Corinthos (Maurice Benard) to kill Peter to avenge Jason Morgan’s (Steve Burton) death.

However, that agreement was twofold; Sonny had to agree to make sure that Brad was paroled and that no one in the Corinthos family would retaliate against Brad once he was on the outside. Brad’s parole indeed did come through, but in order to make sure Selina and Sonny’s arrangement is complete on both sides, Peter needs to die and Selina might send Brad to finish him off!

GH Spoilers – Peter August Is Stabilized But In A Coma

General Hospital viewers know that Peter is stabilized, but in a coma in a private room in the intensive care unit of General Hospital, after being found unresponsive in his cell. He was first taken to the infirmary in Pentonville Prison, but they were not able to get him to wake up or to respond in any way, and he was near death with his breathing very shallow.

The prison warden then had a call made to 911 who sent first responders in an ambulance and Peter was rushed into General Hospital through the emergency room where Dr. Hamilton Finn (Michael Easton) was assigned to his case! Peter is lucky to still be alive considering he almost killed Finn’s brother and Nurse Elizabeth Baldwin (Rebecca Herbst) would have cut off his life support had it not been for Finn!

General Hospital Spoilers – Peter August Is Not A Threat But A Deal Is A Deal!

General Hospital spoilers hint Peter is no longer a threat, a deal is a deal! General Hospital viewers know that Brad worked in the lab at GH before, and this may be where he seeks to be reinstated to his old position again, although it won’t be Selina’s wish for him to do so!

However, no one would question Brad’s presence in the hospital if he were to apply for a position there and that may be a good cover for him to be able to access Peter’s room! Selina had warned the co-chief of staff and Brad’s close friend, Britt Westbourne (Kelly Thiebaud) to stay away from her nephew but she could be useful because of her position. Selina takes advantage of that relationship and instructs Brad to go finish Peter off!

General Hospital spoilers show Britt doesn’t care if Peter lives or he dies even if he is her brother, she does take her job as General Hospital co-chief of staff very seriously! That is why General Hospital viewers saw her stop Victor Cassadine (Charles Shaughnessy) from making an after-hours visit to Peter as shown in a General Hospital Sneak Peek even with a guard at the door!

But Britt might see Brad as well, on his way to Peter’s room, and although she might try to stop him, it won’t be to stop an assassination attempt it will just be to talk since they are best friends. But Selina may have thought about that eventuality and planned for it – and perhaps will stage a distraction to call Britt away from the floor so Brad can complete the task!