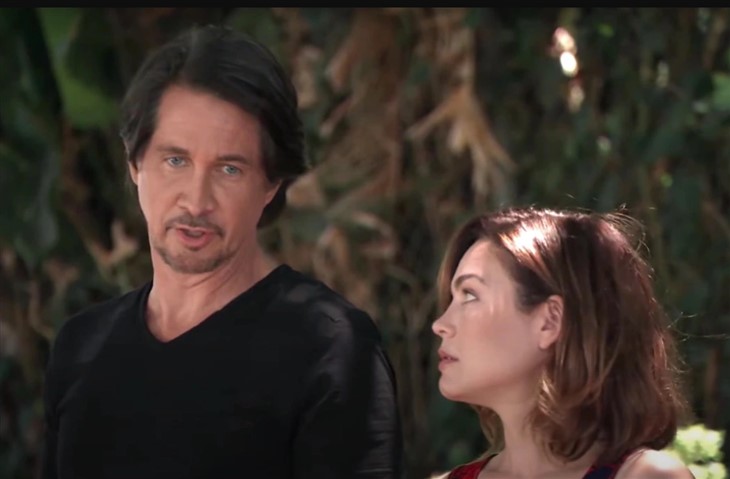 General Hospital Spoilers tease that Elizabeth Webber (Rebecca Herbst) has been slowly preparing for the day that she removes her wedding ring. Liz loved her husband, Franco Baldwin (Roger Howarth) very much but he was murdered in cold blood by Peter August (Wes Ramsey) several months ago. She’s been slowly growing closer to Dr. Hamilton Finn (Michael Eason) and the two have even shared a kiss, but she hasn’t been able to say goodbye until now.

Liz and Finn started getting closer when Peter poisoned Finn’s brother Harrison Chase (Josh Swickard). In a fit of rage after Peter refused to provide an antidote, Finn threw Peter down the staircase at General Hospital. Liz showed up and the two of them believed Peter was dead so they hid his body in a freezer located in an unused part of the hospital.

Knowing the Chase didn’t a chance of survival if Finn went to jail, they agreed to cover up Peter’s death. Not long after, Finn and Liz found the cure and Chase survived. Not long after, they were both horrified and relieved to discover that Peter’s body was missing. They didn’t kill him after all!

After that, Liz and Finn continued to stay in each other’s orbits. They grew closer but neither was sure how the other felt. Finally Finn told Liz that he wanted more than friendship with her. While Liz reciprocated his feelings, if she moved forward with Finn, it would mean that she had to let Franco go. And Liz wasn’t sure if she was ready to do just that. But on New Year’s Eve, Liz put her wedding ring away. She was ready to move on. A first date should be coming soon.

Even though its technically a first date for the duo, they have been inching closer for months now. Look for them to finally take their relationship to the next level and make love! Both Finn and Liz could use a little bit of happiness after everything that Peter has done to them. Let’s hope it lasts awhile before anything can get in their way!

Is Liz ready to move on? Is Finn the right guy for her? Can these two be happy together after everything they have gone through? Anything can happen in Port Charles so stay tuned to General Hospital airing weekdays on ABC. And don’t forget to check back right here regularly for all your General Hospital news, information and spoilers!