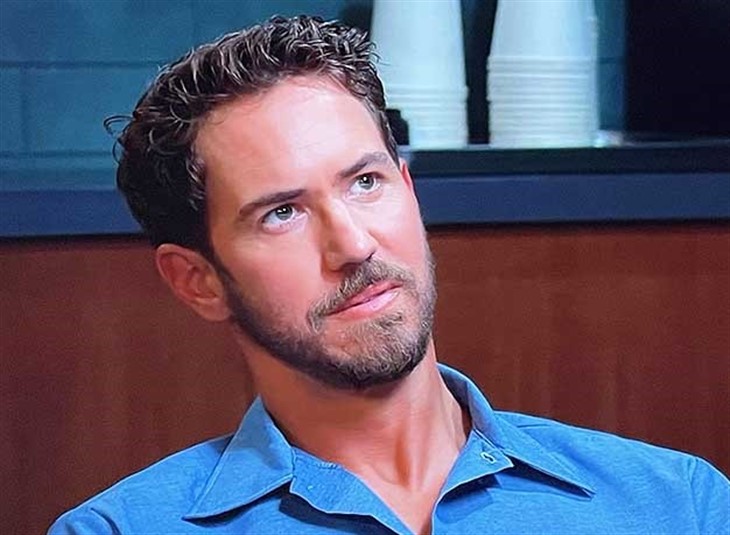 General Hospital (GH) spoilers tease that you can’t a bad man down. Just as Port Charles is preparing to say goodbye to one of its heroes, Luke Spencer (Anthony Geary) one of its nastiest villains in recent years is about to make a dramatic return. Peter August (Wes Ramsey) has been in a coma for the last several weeks after he was apparently poisoned while awaiting his preliminary hearing at Pentonville. But Peter knows that he has a much better chance to escape custody as long as he remains in General Hospital, so look for Peter to keep his revival under wraps.

Another advantage to faking his comatose state is that Peter can gain some valuable information. While no one at the hospital is aware that his daughter by Maxie Jones (Kirsten Storms) is actually being cared for by Brook Lynn Quartermaine (Amanda Setton), Peter may discover that Brook Lynn supposedly gave birth the same night Maxie did. Harrison Chase (Josh Swickard) was able to piece the truth together, so it seems likely that Peter will too.

While Peter is certainly under guard while General Hospital, it may be fairly easy to stage an escape, especially if the guards aren’t aware he’s awake until the last second. Unfortunately, Peter will likely kill his jailers as he makes his getaway. He may even take a doctor hostage as leverage just in case, someone like Dr. Austin Gatlin-Holt (Roger Howarth). He’ll need to get Maxie as well as their daughter so Austin might come in handy for luring Maxie to Peter. Then Peter will want his daughter. For that, he may need someone inside the Quartermaine mansion to help him take the baby from Brook Lynn.

Drew Cain’s conditioning is still intact and Peter knows how to activate it. If he can activate Drew, then Drew can take the baby with orders to kill anyone who gets in the way. This could put any number of Quartermaine’s in harms way unless Peter can be stopped. Anna Devane (Finola Hughes) has been largely ineffectual against Peter up until now. But could she end up saving the day?

Is Peter about to wake up? Could Maxie and her baby fall into Peter’s trap? Will Anna finally save the day Anything can happen in Port Charles so stay tuned to General Hospital airing weekdays on ABC. And don’t forget to check back right here regularly for all your General Hospital news, information and spoilers!