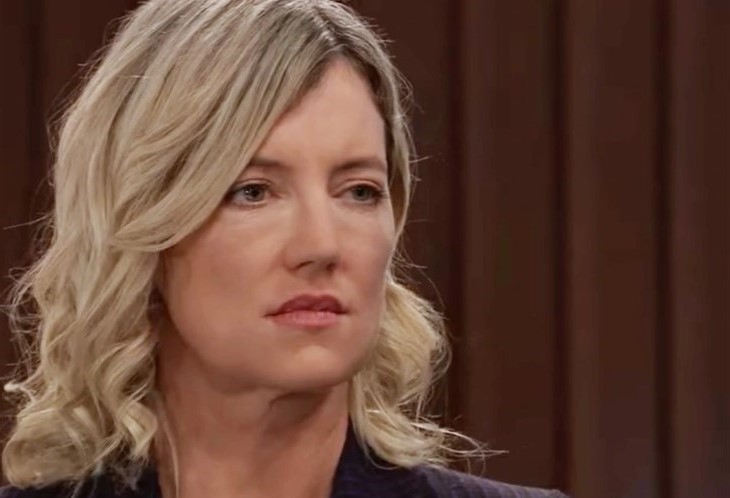 General Hospital spoilers and rumors tease that Nina Reeves (Cynthia Watros) will give into her Westbourne genes, and she’ll plot a marriage to Sonny Corinthos (Maurice Benard) to keep access to Wiley Corinthos (Viron Weaver) in future episodes of General Hospital!

General Hospital viewers will recall from a recent episode of General Hospital how Willow Tait (Katelyn MacMullen) wanted Nina to give up her grandparent rights to Wiley Corinthos! Willow came to Nina’s office to tell her that the only way she could get around Michael Corinthos (Chad Duell) and his vendetta against her was to give up her rights to Wiley – temporarily.

Willow was sure that he’d come around eventually, and she could convince him that letting Wiley have a relationship with his maternal grandmother was best for Wiley, but Nina vehemently disagreed. That would only confuse Wiley in the long run, and how can Willow be so trusting in Michael anyway, after all, Michael set up this whole fraud case against Nina behind Willow’s back! General Hospital viewers will recall that Willow didn’t know much about it until she went to the court in Llantano County, Pennsylvania and heard the testimony of others and then had to answer to it herself!

General Hospital spoilers show that Ava Cassadine (Maura West) has been encouraging Nina to fight for her man, meaning “Mike” also known as Sonny, and Nina finally gets what Ava has been trying to tell her. Nina has been too used to letting others control her and push her around, and it is not the evil thing that Nina thinks it is to take advantage of situations and try to control them herself!

Every Westbourne woman has had the genetics to be a conniver and plotter in her; and Nina realizes she doesn’t have to turn into her mother to be in control. However, she can use those types of “skills” in a constructive way to get what she wants and benefit others at the same time, and realizes that if Wiley’s paternal grandfather and maternal grandmother got married, both Sonny and Wiley might be happier!

General Hospital spoilers say Carly Corinthos (Laura Wright) has rejected Sonny for not giving her full disclosure of what happened between him and Nina in Nixon Falls, and didn’t want to hear his explanations, deeming them as poor excuses! General Hospital viewers know that what Sonny didn’t tell was no worse than what Carly didn’t tell, namely, that she got all her old feelings for Jason Morgan (Steve Burton) back and her grief for him outweighs her love for Sonny.

Nina was the one who has been there for him after Carly told him not to come back home, and he talked to her about his troubles. Nina knows that those feelings Sonny had for her as Mike didn’t just die, and Carly’s doing everything she can to kill his love for her, all she has to do is be there for him and bide her time! When the divorce from Sonny is final, all she’ll have to do is convince him to marry her, and Wiley will be her grandson and her stepgrandson, and she knows it won’t be hard to do!