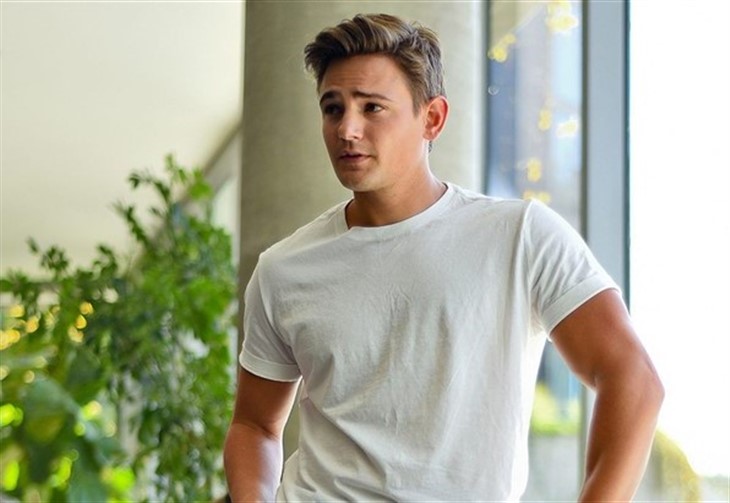 Days of our Lives (DOOL) spoilers tease that the Devil went down to Salem and liked it so much he’s people-hopping in an attempt to get what he wants. Right now wannabe filmmaker Johnny DiMera (Carson Boatman) is the unlucky one under possession. The handsome and talented star recently talked to Soap Opera Digest about the part that has him rocking neon yellow eyes and a sinister metallic voice.

According to Boatman, “You have to fall in love with your character if you want to do a good job playing it, and so for me, having Johnny play possessed, it’s like I can do as an actor pretty much whatever I want.”

He added, “I can treat people however I want and I can be the bad guy and get to show that side of my own craft without the character of Johnny having to take any credit or blame for the bad deeds. So it’s kind of the best of both worlds; I kind of get to have my cake and eat it too.”

DOOL Spoilers – Will The Devil Ever Leave Salem?

Johnny married Chanel Dupree (Raven Bowens) only to have the devil dump her like a bag of rocks in front of both of their families. Before he came on the scene his sister Allie Horton (Lindsay Arnold) and Chanel were friends, and flirting with the possibility of something more.

Of this triangle Boatman said, “I like the dynamic that creates between Lindsay and myself and I, I think that’s very cool, in that it’s very unique; I don’t think I’ve ever seen this on a show before.

“And it’s fun. It’s just a fun storyline to play because it’s so outlandish and I think that’s kind of been DAYS’ M.O., that anything can happen in Salem, really, truly anything. And so I think continuing to push the envelope with this love triangle, as well as sexual fluidity, I think it’s very bold.”

Boatman actually found out about the Jo-Devil plot via the makeup department!

He recalled, “So I get a call from Marisa. She says, ‘Hey, do you wear contacts?’ And I was like, ‘No, no, Marisa. I don’t.’ She was like, ‘Okay, cool. Well, there’s a place.’ And she gave me the name of the place and the address and said, ‘There’s an appointment for you to go in there at 11 on Monday to go get fitted for some.’ And I was like, ‘Marisa, am I going to be the Devil?’”

And the rest is history, with Jo-Devil doing a bang up job of turning Salem upside down, with none the wiser—yet!